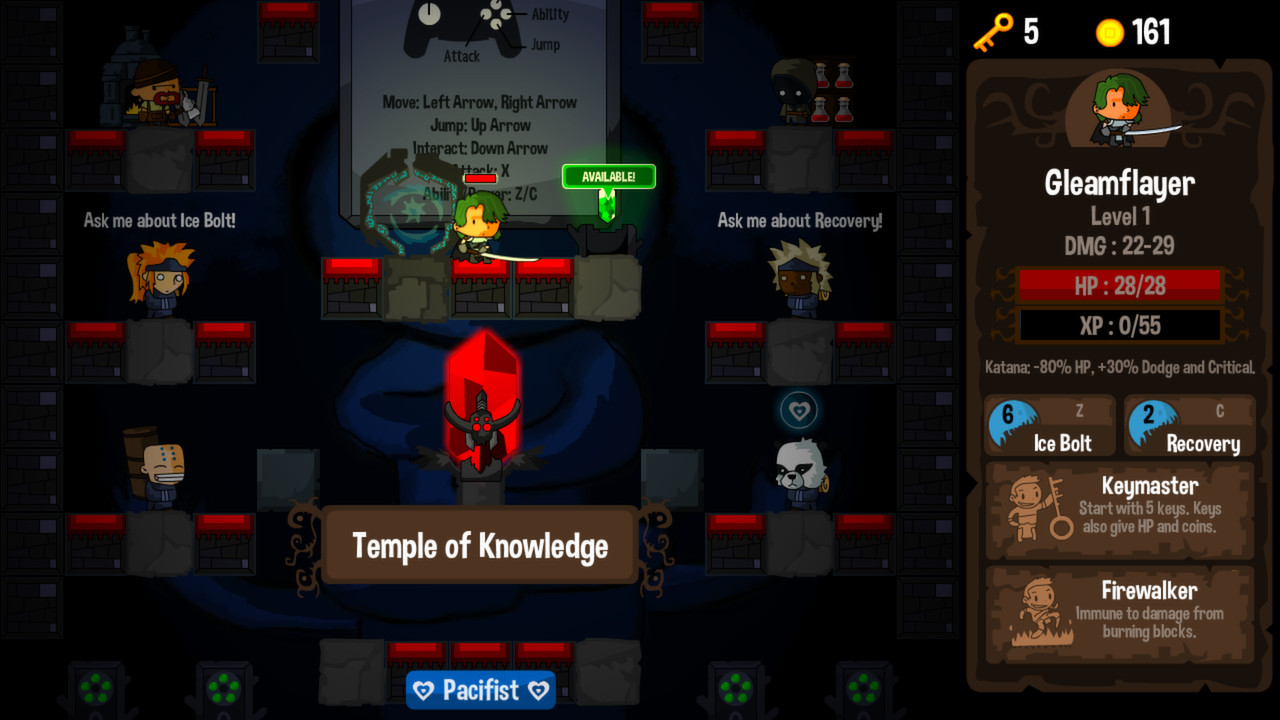 Vertical Drop Heroes is a procedural platformer RPG hybrid with roguelike elements, where your hero adventures through randomly generated stages. Armed with a variety of skills and traits, you must use your cunning and reflexes to survive the dangers of each stage, until you face the final boss and uncover the truth behind the game!

- Randomly generated stages, enemies and bosses, resulting in a very replayable game
- Artwork, coding and animation done by one person (me) in that unique Nerdook style
- Split screen, local co-op, as well as local network coop!
- Destructible terrain and multiple uses for each skill gives you plenty of options to approach the different situations generated
- Tons of skills, abilities, traits and powers that you can unlock in the game, creating a different hero each time
- Unique combat system where proper planning is more important than quick reflexes
- Persistent upgrades allow you to carry forward progress between games, with a choice between increasingly expensive persistent upgrades or generally cheaper temporary upgrades
- Every enemy and boss has been designed to provide challenge and variety

BACKGROUND
This is a HD remake of GIGANTIC proportions for Vertical Drop Heroes, the original webgame with over 2 million plays... from Nerdook, a one-man developer with a portfolio of games that has accumulated more than 50 million plays worldwide! Bigger and better in every way, Vertical Drop Heroes HD revamps the entire game into an epic, randomly generated platformer RPG! 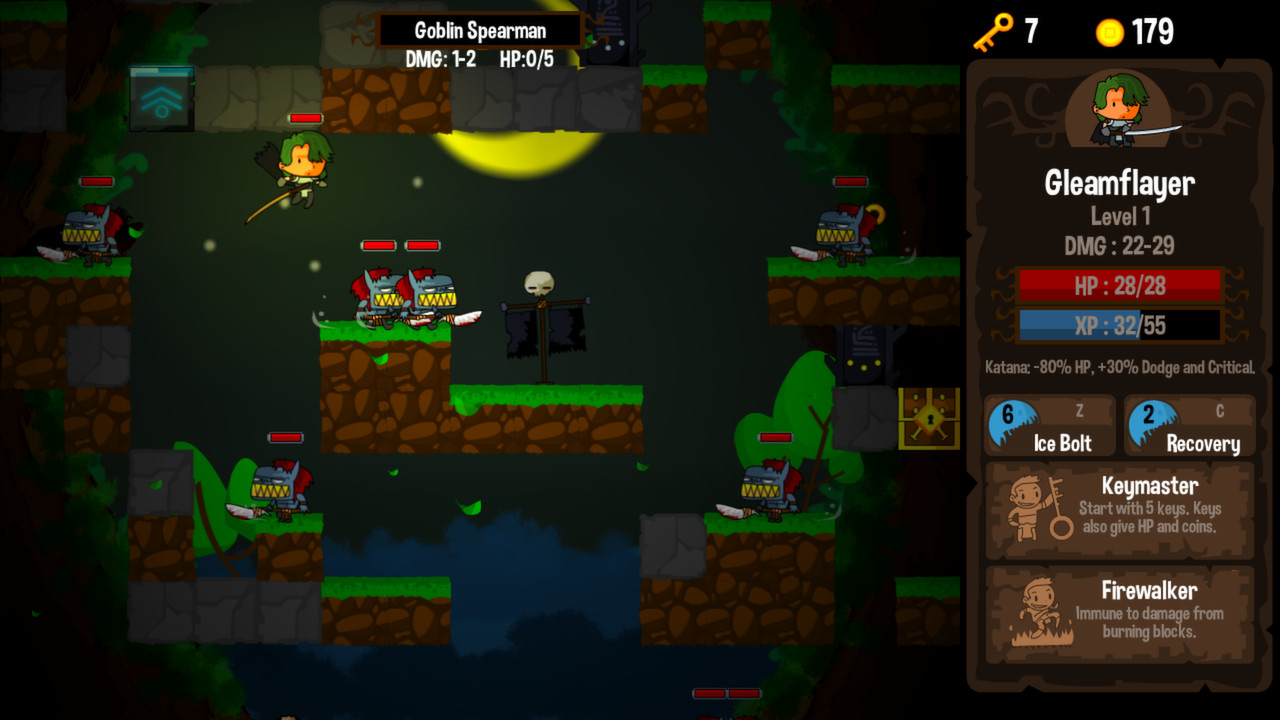 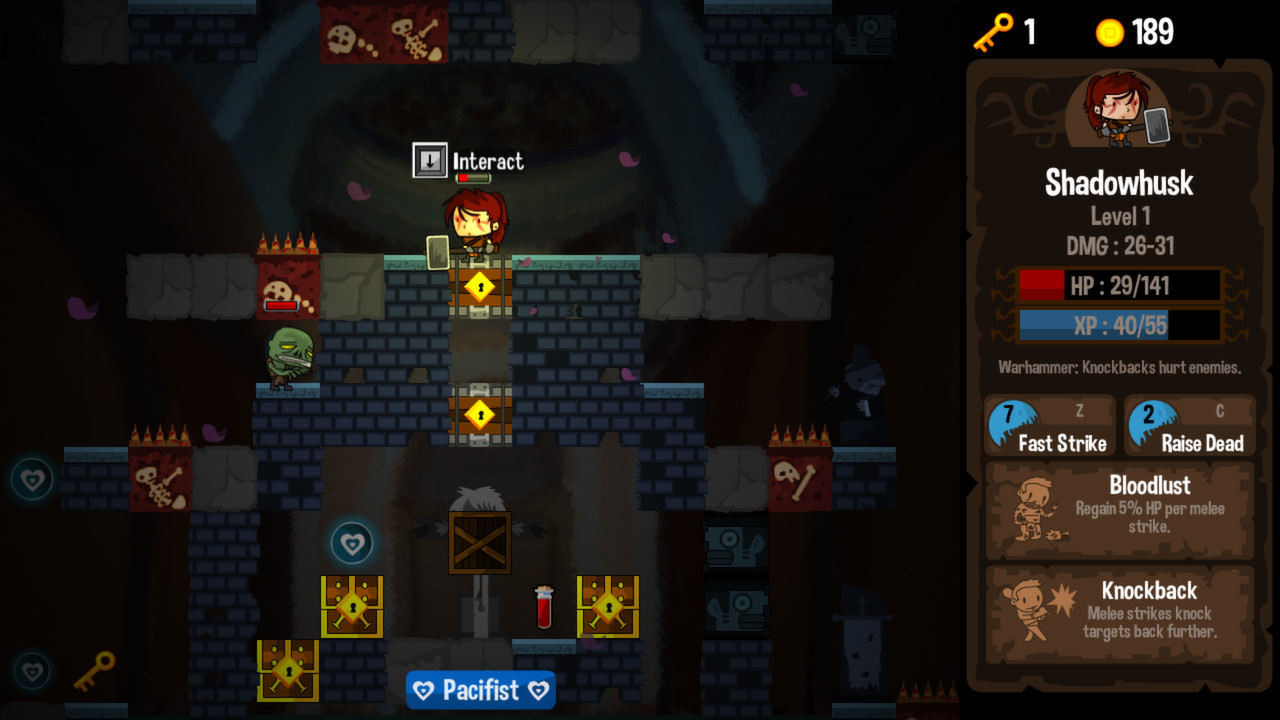 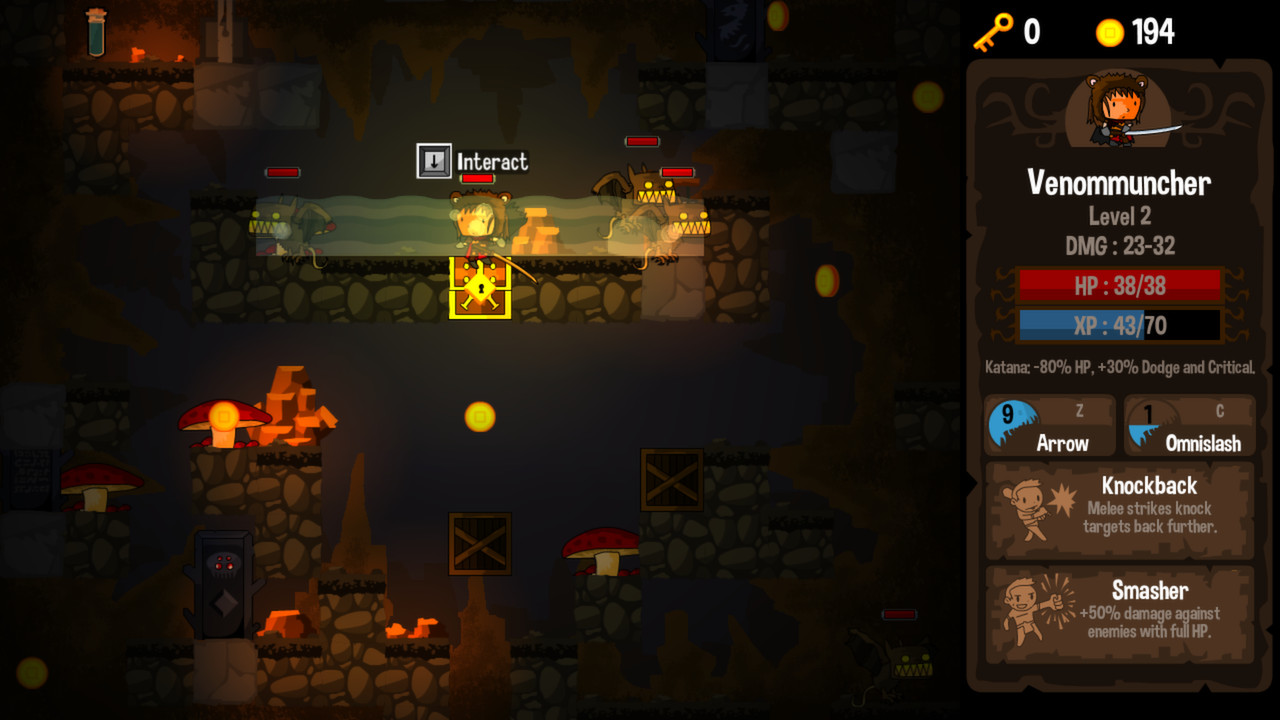 
This game is an interesting take on "rogue like or Rogue light" and do think you'll enjoy it.

http:\/\/youtu.be\/RYgtPWXmpp4<\/a>. Anyone who liked Rouge Legecy should pick this game up. That is all.. Disposable Heroes HD: The Legend of Ferretbearer, and Pinecloak, and Skybane, etc.

VDH is like a crash test facility for fantasy themed champions. The player will spend their time trying to find the perfect hero to use as a protagonist (after generations of disappointments), able enough to complete the 10-level quest by which so many predecessors have inevitably failed.
Approaches to play-style can differ from chaotic to tactical; the path of progressive pacifism is possible, though most will prefer to engage with blade, bolt or blast (amongst other things).
It is simple to grasp, though many heroes will meet their doom early. Fortunately, no effort (death) goes unrewarded as resources (as well as abilities) stockpile, which means it is not nearly as frustrating as it should be.
Skill acquisition is indefinite, meaning earned abilities become inherent, allowing for a more expansive genotype, and thus is an inspiration to continue despite the permadeath nature of the game.
The only notable grievance comes within a poorly designed HUD, which can hinder co-op interactions, making for a slightly cramped feel to split screen mode.
'Falling to progress' is a significant enough change logistically to alter the feel of the game from similar titles, and works to enhance the fast paced direction that the game embodies.
VDH is fun without the demand of time input, and although it isn't one you would likely spend hours on, you'll come back to it often; the epitome of the casual indie.

- M\u00e9nageGameTrois
, J.. Just to relive the nostalgia, I had to go back and play the original Vertical Drop Heroes on Kongregate. This truly does its predecessor justice, giving that fantastic risk-reward system and adding so much more to it. There are some aspects of the game that are easy to exploit (using Confusion on the Worm boss makes the fight ever-so easy, especially when I know recharges are around the corner), but even with that, the game provides a good challenge and requires you to put both your platforming skills and rogue-like decision making skills to the test. I especially like the addition of the pacifist system. Normally the choice of "To fight or not to fight" comes down to whether or not you can gain more than you lose, but in this case with many fights being winnable without much or any loss, a reward for avoiding the easy massacres is tempting and very worth it. The story itself is also simple but very befitting; so often do games tell of the great hero that overcame evil with the dozens of game-overs in between never even being acknowleged. Knowing that each failed attempt is simply another step in the story makes me even more anxious for the next attempt.

I look forward to seeing what comes out of Nerdook Productions next. Even if it's another remake of an old Flash game, I know it will be as good-- if not better than-- the original.. Paid as much as I would for a decent cheese burger and it was a fun game to play for a few hours. Not terribly long, moderate replay value, and like Rogue Legacy, you spawn as a new hero with new abilities, but I didn't die enough to fully enjoy that mechanic.

7.5\/10 would play a game simular.. This was an impulse\/curiosity purchase and ends up being a game I play most often...and I have a lot of games! It's fun, it is challenging, but not to the point of discouraging or losing enjoyment, and it has the feel of new-and-different on every playthrough. Levels are also varied and add to the freshness of each play. There is a load of variety in weaponry and special abilities, more special weapons and abilities you can work toward, and there is a rougue-like feel throughout. If you are thinking about getting this, it's a safe bet you'll have fun with it, and can either play for a short term or long. I've put a good amount of time into this game...I suppose I like having fun, then! All in all a very pleasant surprise.. Achievements still not working on mac.. Highly addictive Rogue-like game, the gameplay is really fun and a lot similar to Rogue Legacy but instead of side-scrolling you slide down till you reach the bottom of the level where you fight a boss then you can proceed to the next stage.
at the start of each playthrough you have a choice between 3 randomly generated characters with different attributes, choose what best suits your type of playing and proceed, you character starts at level 1 everytime but there are upgrades you can buy before starting the game with the money you collected from your previous runs, you can even buy level ups to your character and skip stages with that money.
the game is really fun and addictive, the soundtrack is good and the graphics aren't bad at all, and like all Rogue-like games, if you like it you will end up spending tens of hours in this game and you will never regret spending your money on it.
highly recommended of course.. [Summary] (Summary first for clarity and people who don't want to read a lot)
Over all a quite bad game. It would be ok as a flash game to kill an hour or two but not worth buying. The only redeeming quality is the local co-op, but the game still has fundamental issues with their design.

[Combat]
Very repetative and dull combat. Hitting someone isn't an issue of hitting them with you weapon but more of them being in front of you when you strike (as in the weapon never connects). Every battle is composed of hitting the opponent then stepping back quickly so you can go in and stab them again (with slight variation if you still have your spell left to use).

[Store system]
You can buy two things that makes you stronger. More damage and more health. You can also purchase an upgrade for the passive coins on the maps (they are worth experience and gold, they disappear when an enemy is killed).

Spread out through the map are merchants selling a single ability each. These will then be shuffled into your random spells for your new generations. Most of these purchases are regretted as there is no way to confirm if an ability is good until you purchase it and use it.

The store system is over all very underwhelming and it feels like the store system was added last minute to balance the fact that levels only get harder because the monsters have more health and hit harder.

[Level design]
Throw in random blocks in a maze where you navigate to the bottom where the boss is. Add prisoners (that help you if you let them out) and treasures. Plus a quest per level that is either find Y of X or kill Z and come back to me. The map is not designed so that you can travel upwards, to combat this there are teleporters that bring your to the beginning spread out across the map.

You start from level 1 and progress upwards. Some levels have the ability to pay gold so that you can teleport there instantly (for a negligible price) in new generations. Monster design is pretty limited, the higher level the map is the harder the monsters hit. They look different and sometimes they might be ranged but all in all this doesn't change much.

[Stability]
Crashed only once every 30-45 minutes and never in a way that progr...