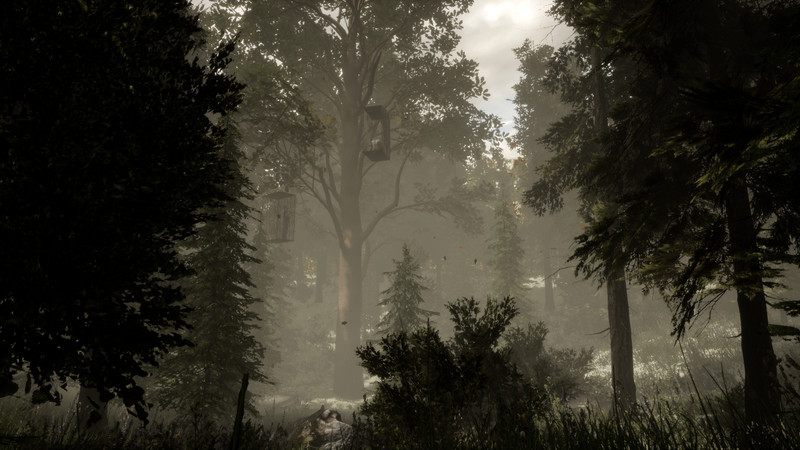 The Woods: VR Escape the Room is a roomscale-based, escape the room adventure game. After a walk in the woods, you find yourself locked in a swaying cage above the forest floor, with no recollection of how you got there. Discover the mysteries this forest has to offer. Solve puzzles, decipher ancient texts, and uncover the mystical secrets hidden within these woods for many years.

Available for Arcades on SpringboardVR b4d347fde0 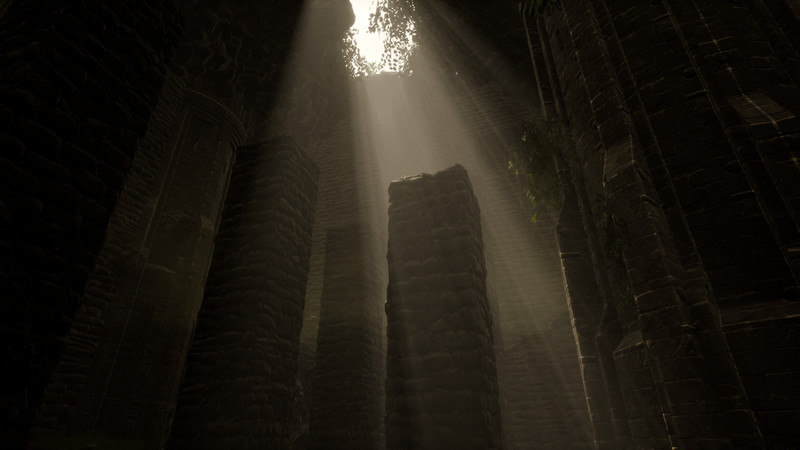 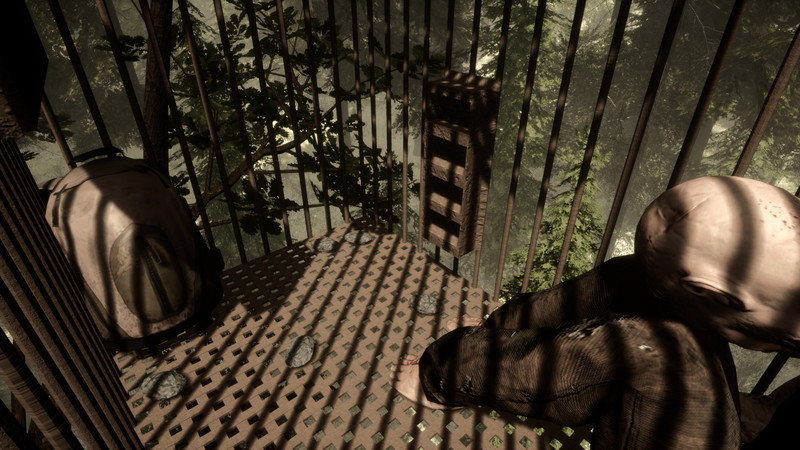 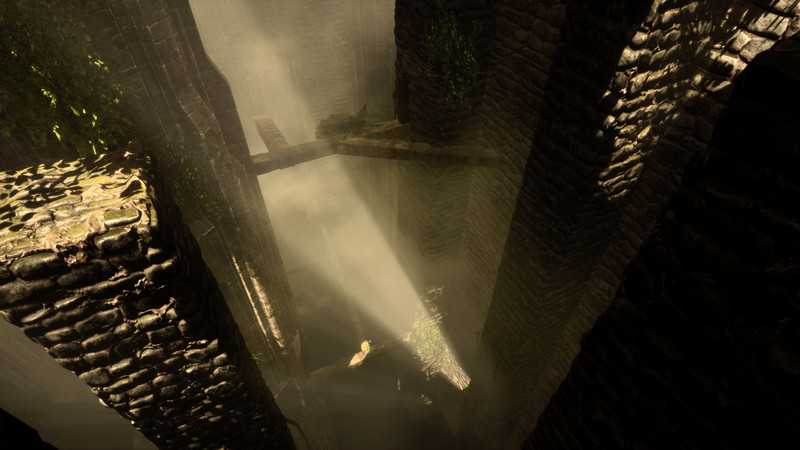 
Good price for a decent puzzle game. There are multiple "rooms". I'm currently stuck in the cavern room. The environments are very well done, and the immersion is quite good. I don't know how long the game is, but since I bought it on sale, what I've seen so far makes me recommend it. Even though I'm not a big fan of puzzle games, I like it for the experience of the creepy (but not very scary) settings.. I'm so confused. I have taken to the internet to find out if this game is really only 10 minutes long or if I'm missing something.

First time booting it up i got stuck on the second scene. I probably spent 20 minutes searching through everything to see what I was missing. I decided that something must be wrong, so I restarted the game and sure enough there were significant key items that never loaded the first time around.

The actual game took probably 10 minutes tops, then the screen went white for another 2 minutes before the "You escaped" showed up. Very very confused if that was the full game or I just glitched to the end or something.

At least it was cheap.... I had high hopes for this game, given that previous ones from the same author have been pretty good, but unfortunately it seems to have been released in a very buggy state indeed.

In the first scene, I used the knife in what turned out to be the correct way, several times, but nothing happened, so I gave up on that idea and spent time trying to open the bag, search the body, open the panel, find more items, all unsuccessfully. Finally out of desperation, I tried the knife once again on the one item it does work on, and this time it worked.

The next stage was straight forward, but then in the room after that with the moving pillars, I think the game broke. I had figured out the mechanics of moving the little orbs around to where I could get them, but on the part where you have to press the button to get them to drop, the button stopped doing anything after a while... at that point there was nothing left to do but quit the game.

I also note other bugs

The green gems in the grid that move the pillars resulted in animation glitches, with the pillars jumping from position to position without animating.

The gems move without needing to be gripped - this meant that I was moving them unknowingly when standing next to the panel.

Here's the basics:
- Short, can beat it in about 20 minutes
- Really cool environment in the first few sections, but can cause slowdown with all the foliage and effects
- You leave that cool environment for a boring cave quickly
- The main mechanic in the cave section is clunky and doesn't feel good
- Nothing to difficult, just frustrating at parts

If the first section was the basis for the game, I'd be down to recommend. But the bulk is spent in a cave with lame mechanics. That, plus a really short amount of content, means I can't recommend it.. Q\/A I have been been in this cage every day since I purchase this game. Is there a way out? I been on youtube looking for a video for answers..... 7\/10
Looks great, but doesn't make a massive amount of narrative sense. Also, I completed this in 20 minutes.

Greetings, to all prospective Governors!

The colonization of Aven Prime is finally upon us!

To those that have supplied feedback through the beta phases and demo; thanks for helping make the game what it is today - we couldn't have done it without you. To those new to Aven Colony, welcome to Aven Prime! We can't wait for you all to explore this beautiful but treacherous place, and uncover its many secrets!

Once you've settled in your new colonies, do let us know how you get on by sharing your feedback in the Community Hub, or reporting any issues you might encounter.

We discovered some rare stability issues this morning and just posted a hotfix build.

Please be advised: if you saved a game in the last 5 days or so and encounter any issues, please try the following:


This may be helpful in some cases to clear out a few rare issues with bad save files.

If you encounter any further issues, please let us know in the Forums!
. Now Available: Water Worms!: 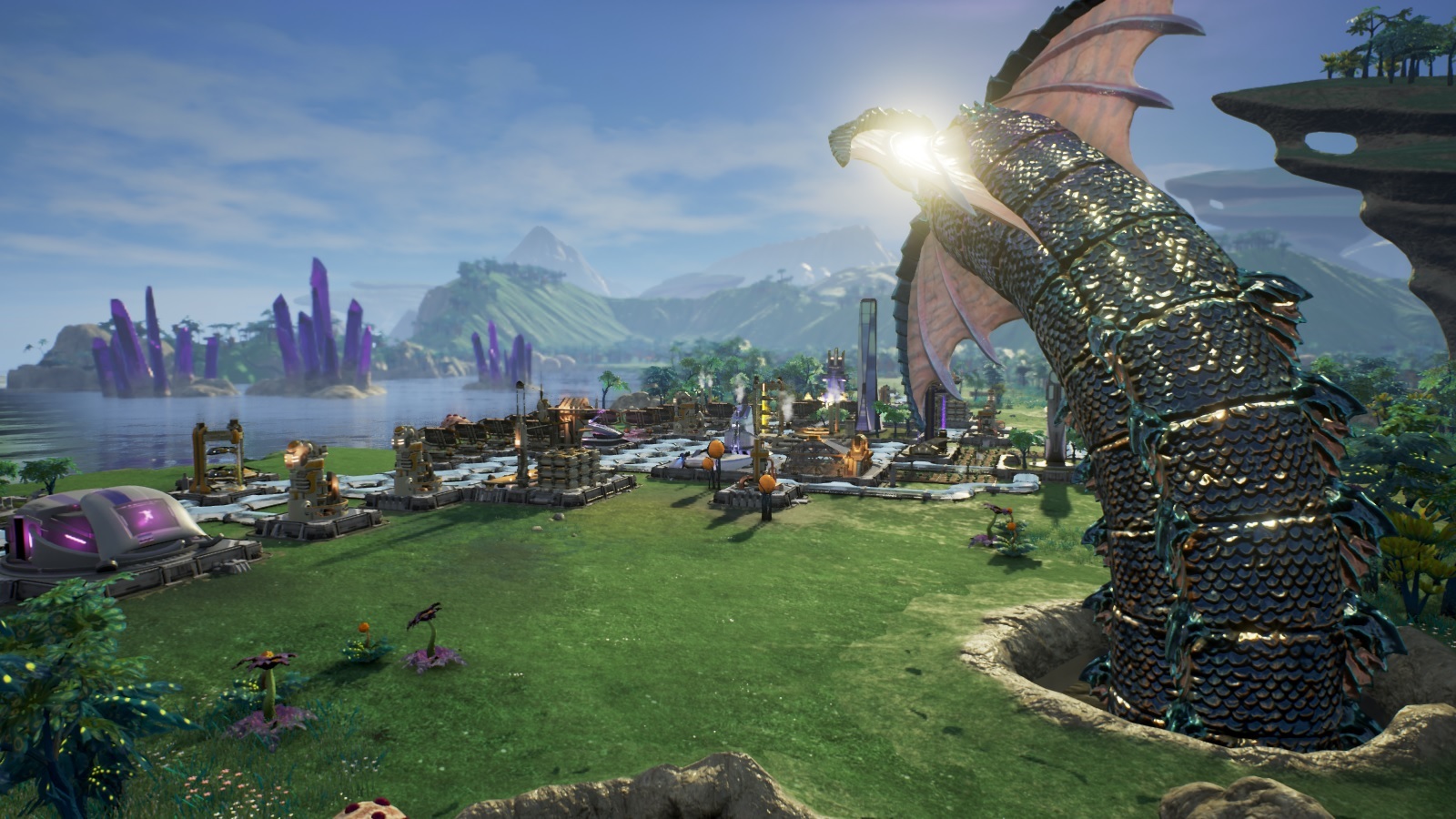 While the Aven Expedition first became aware of the presence of Sandworms during the mission to build a mining colony at Sandy Gulch, subsequent expeditions to Hyla's Crescent and Kelori Strand revealed the presence of a distant cousin, nicknamed "Water Worms" as they inhabit watery tunnels in the few forested areas of Aven Prime.

After some analysis, Expedition scientists determined that Sandworms and Water Worms do not build new holes all at once, as this would require them to move massive amounts of material. Rather, they are believed to build and expand their tunnels continuously throughout their life cycle, gradually digging out and widening their tunnel networks as they grow from tiny larvae to full-fledged mature worms over several decades. These holes are then adopted by their descendants.

Over time, several parts of Aven Prime have become riddled with these enormous underground tunnels, allowing both worm species to flourish. 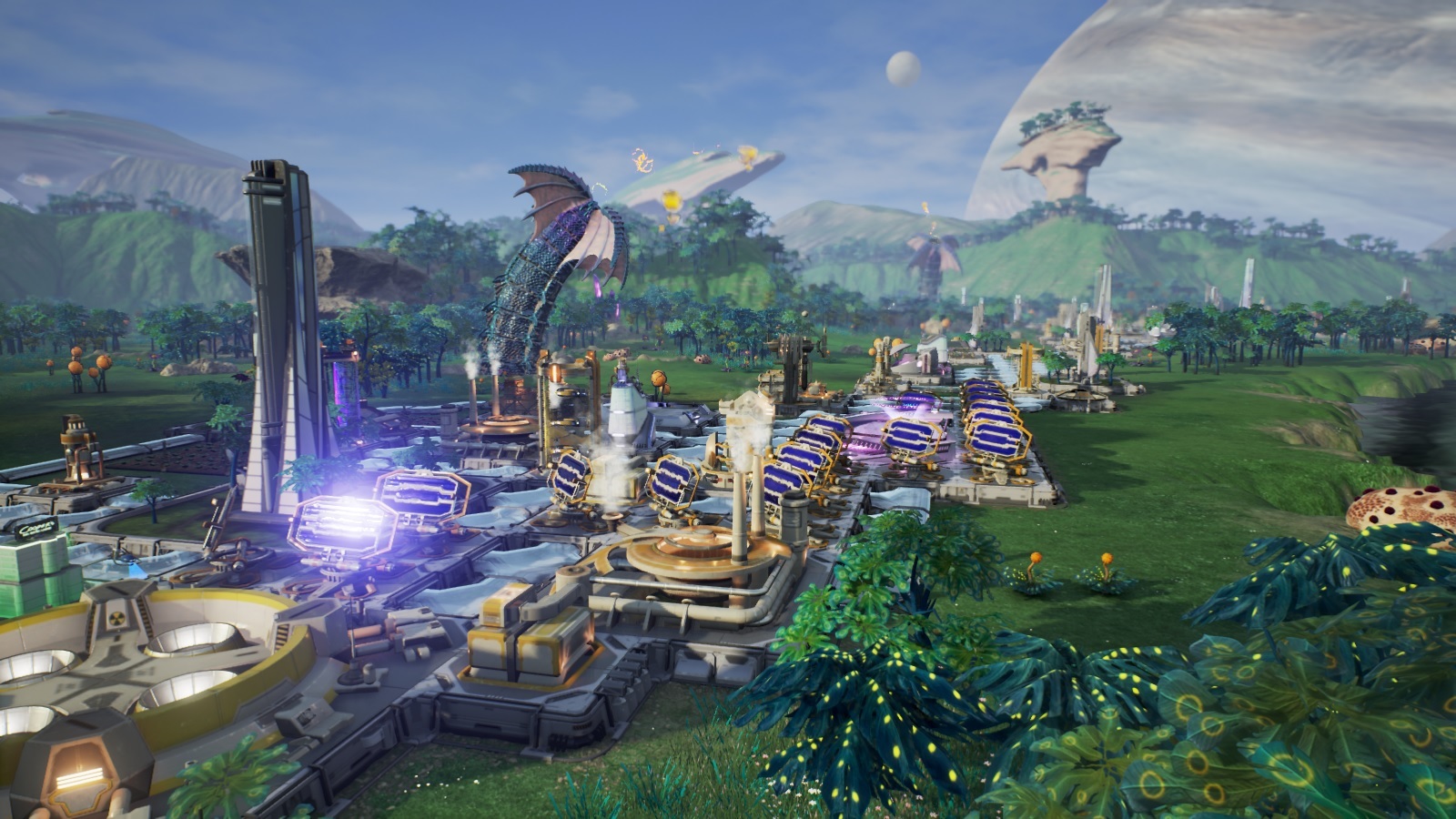 It is believed that the four massive, bony "fang" structures visible near the mouths of both worm species have several purposes, not only assisting the burrowing process, but also serving as a defensive weapon and helping the worms clear out the occasional pests that attempt to infiltrate their tunnels.

Expedition scientists have also detected small earthquakes in areas with substantial worm populations. As both worm species are believed to be highly territorial, it is theorized that some of these quakes may be related to territorial struggles between the worms for control over different parts of the subterranean tunnel network.

Nearly all of the holes visible in Vanaar, Sandy Gulch, Kelori Strand, and the other landing zones are now believed to have been carved out by sandworms at some point.

Although both worm species occasionally take their territorial instincts out on human colonies of the Aven Expedition, it has been discovered that plasma shots from Watchdog Plasma Turrets will scare the worms into retreat without piercing the worms' thick hides or causing any lasting damage.

Water worms will be coming to the Aven Colony beta and demo in early July.

We've posted a quick update that significantly improves the interface for Energy Batteries: 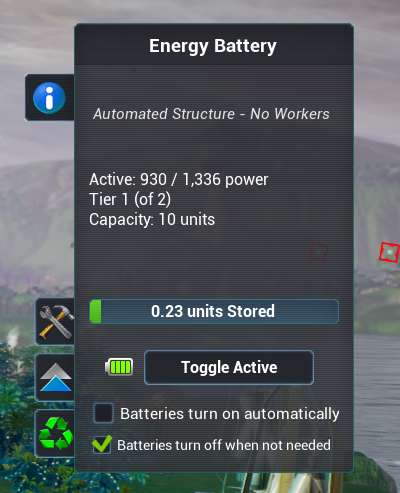 Some users had expressed a desire to have Energy Batteries turn on automatically and remain on even when their excess power is no longer needed. Now, you can achieve that result using the new interface; just set the check boxes to the opposite of the settings shown above.

These settings are global and always apply to all Energy Batteries.

The button has also changed from opening the Powers & Policies pane to directly toggling the battery state.

We've also checked in some fixes for a few issues with Ark Ships building installations.

Soon, you'll be able to see a top-down view of the entire map, in addition to many other improvements. 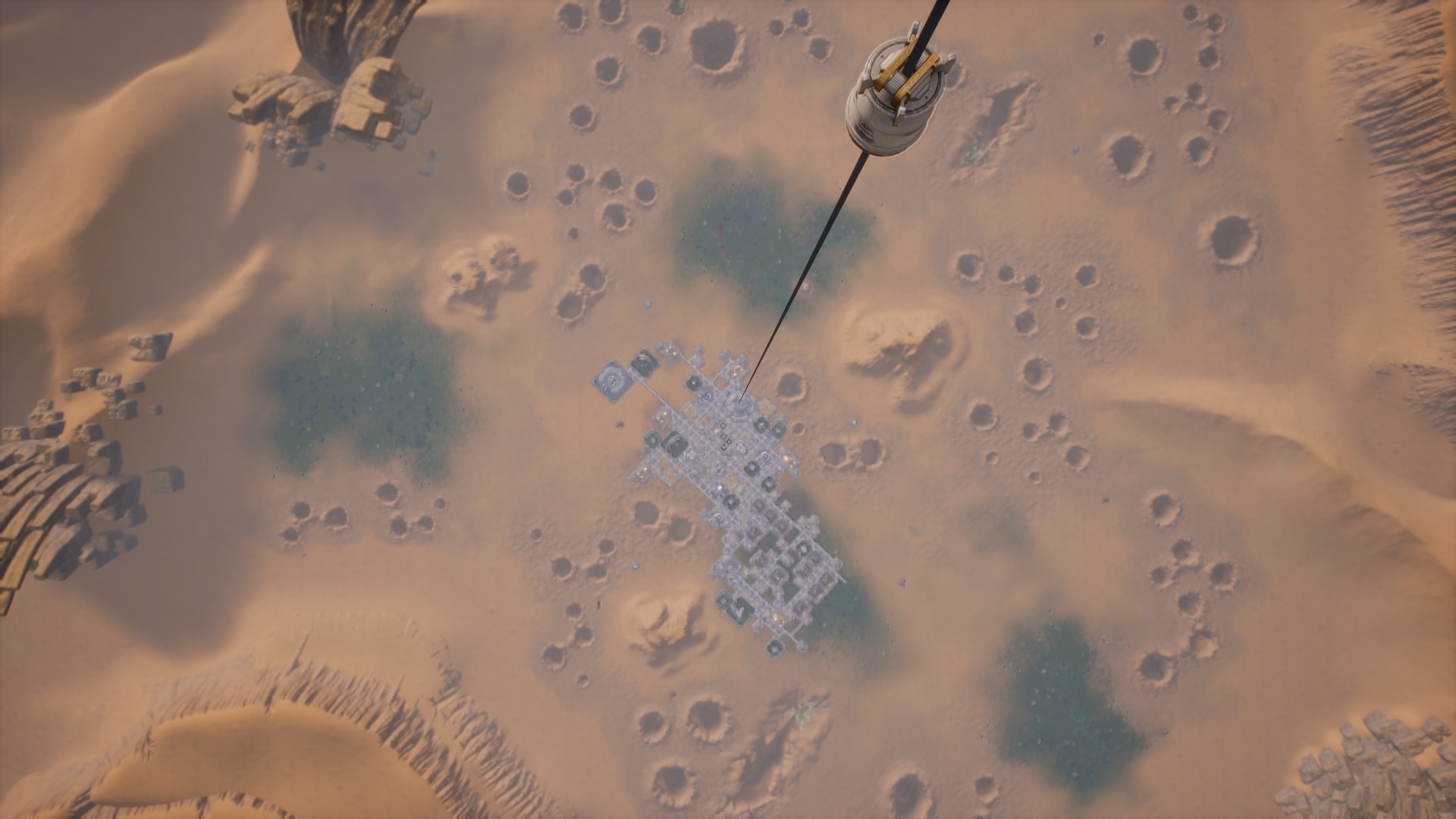 We'll be posting more animated GIFs of this system for #ScreenshotSaturday and #EpicFriday over the next few weeks, along with teasers of some of the new buildings coming to Aven Colony ... such as the mysterious new structure we posted last week: 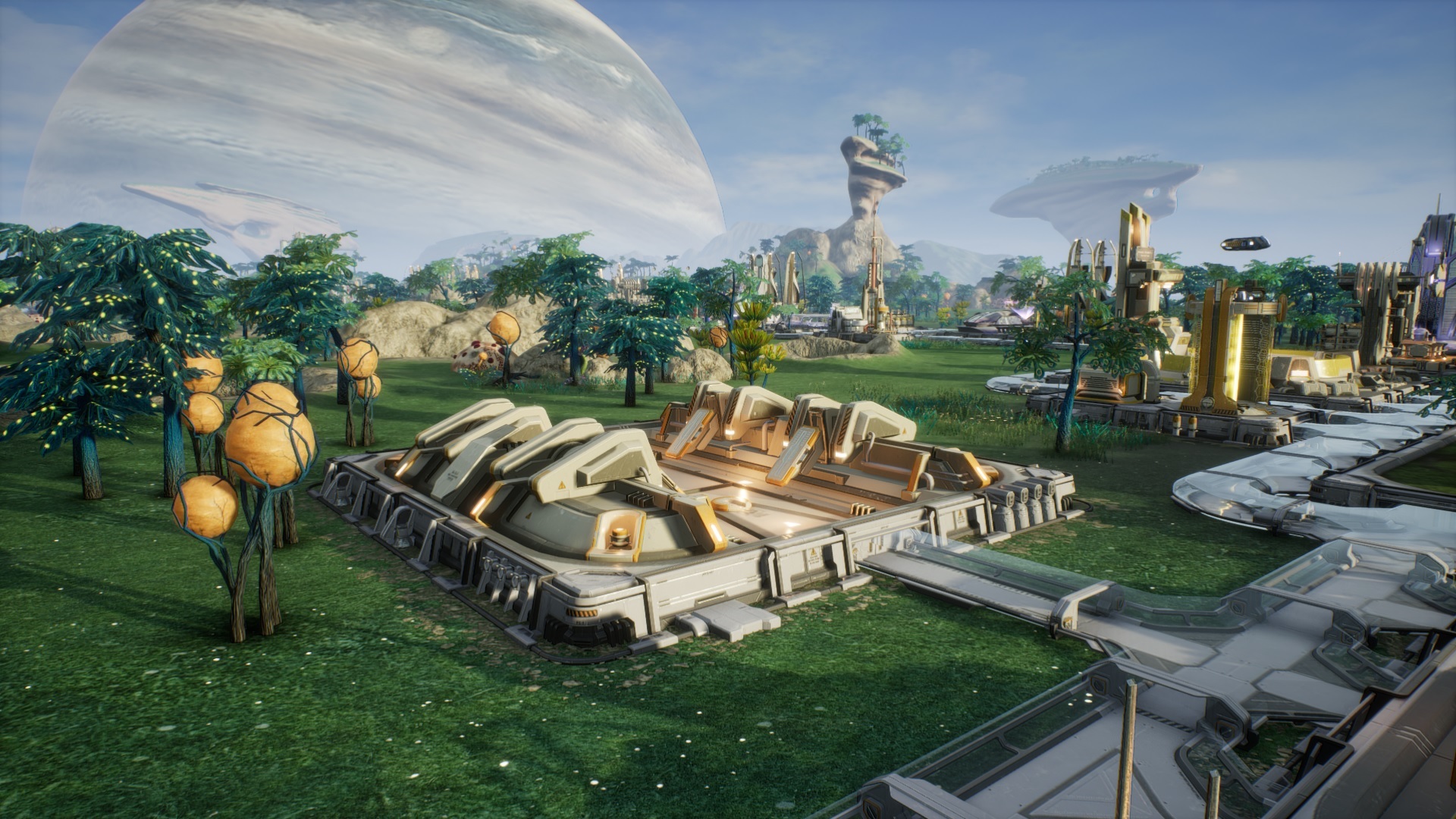