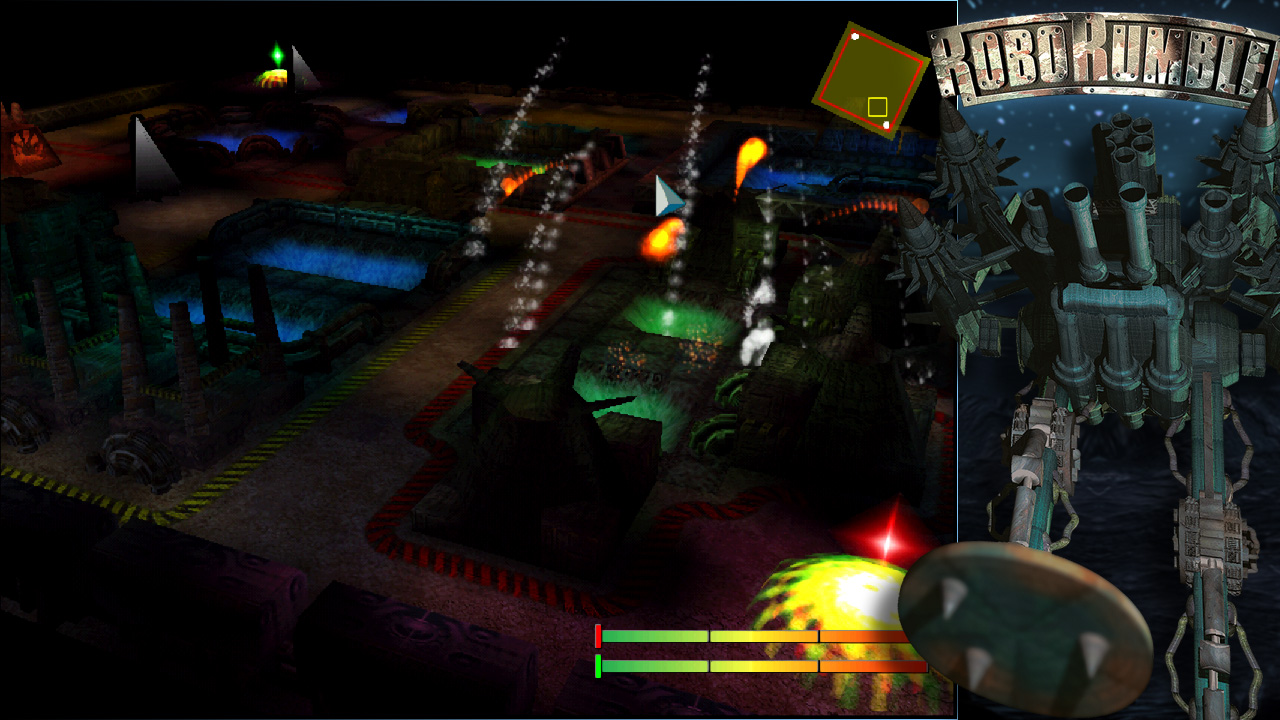 RoBoRumble is a real-time 3D strategy game, offering two major battle campaigns consisting of 15 missions each and a multi-player mode with hot combat for up to four players at a time. One of RoBoRumble's key features is the unique way in which Units are assembled. Unlike most games of this type, where the player is given a palette of already designed Units to choose from, in RoBoRumble the player constructs his own from a palette of different components. This gives a far greater number of variations and adds an extra strategic dimension to the game.

Each Unit (known as a "Robo") consists of a chassis and a weapon mounted on it. Available chassis designs range from two- or four-legged runners to jet-propelled, tracked or wheel-based craft and even tele-porters. There's also no shortage of weapons to mount on them. In addition to the standard lasers, heavy artillery and machine guns, RoBoRumble offers some imaginative creations like an "Oiler", that slows the enemy down by leaving slippery pools in his path, and the "Whirlwind", that picks up the enemy and throws him against the nearest wall. Each of the two parties in the conflict have eight different chassis and weapons to choose from. One side leans more toward "brawn", utilizing pure firepower, while the other tries the "brains" method of better weapons design. Whichever side the player chooses, only a small pool of weapons is available at the beginning. The player can increase the pool by giving out development contracts between missions.

The third optional component of a Robo is the so-called "Booster". This normally costs only a fraction of the other two components, but can have a huge effect on the game. Some Boosters double the Robo's speed, while others give the Robo more firepower or firing range, make him invisible, or increase his intelligence.

The relatively complex way of creating Robos stands in heavy contrast to the intentionally simple resource management. The source and at the same time, the main base, of the player's and the enemy's army is a dome-shaped, glowing "Energy Pool", which he must protect from attacks. The pool's capacity, which varies with each mission, is given to the player as a "budget" and used to create Robos. When a Robo is destroyed, his "energy" (the energy which was invested in creating him), flows back into the pool, so the player can build new units.

The base consists of three different energy levels. Whenever one of these levels comes under sustained fire and is destroyed, it triggers a violent explosion that, in turn, destroys all enemies in the immediate area. This "cleansing" effect sees to it that the defending party gains time to gather his troops and go on the counterattack.

The distant future – the planet Mars. The biggest arms contract in the history of the human race will be given to one side. The most powerful prototypes square off in a head-to-head battle. The winner closes the deal of a lifetime and gets the honor of defending Earth in the Final Battle against the evil Aliens. Will that lucky person be you? 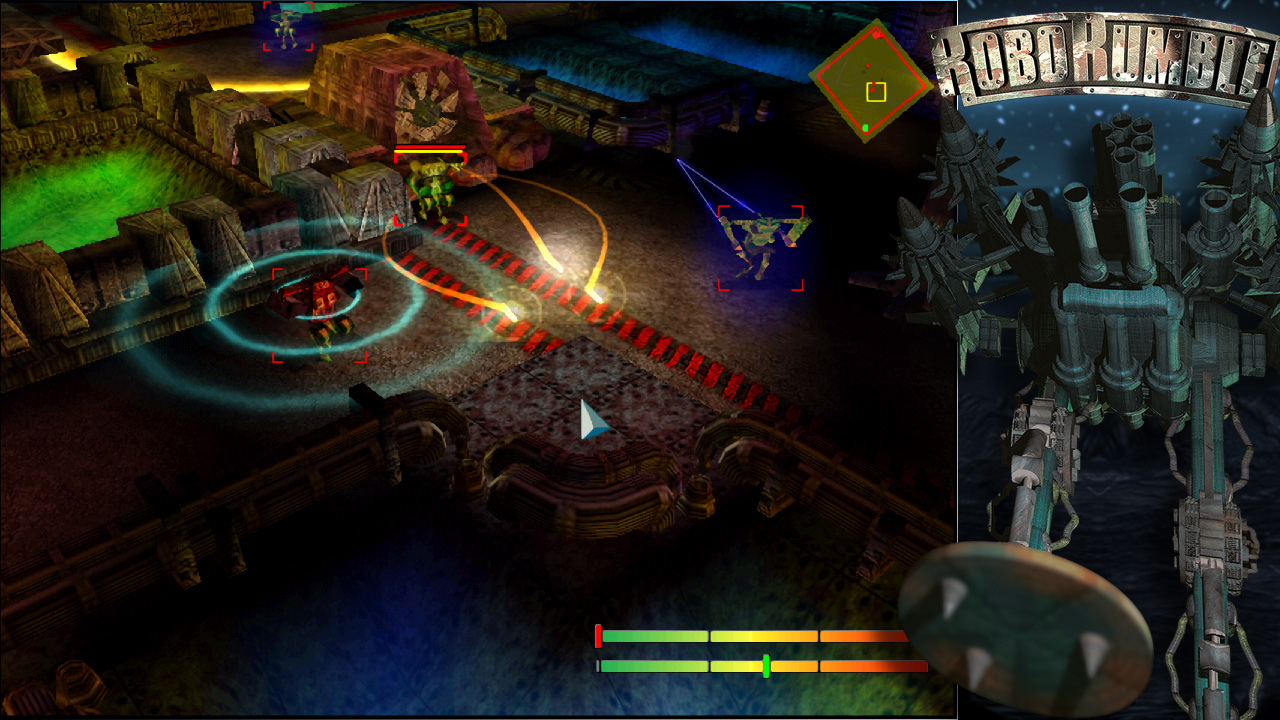 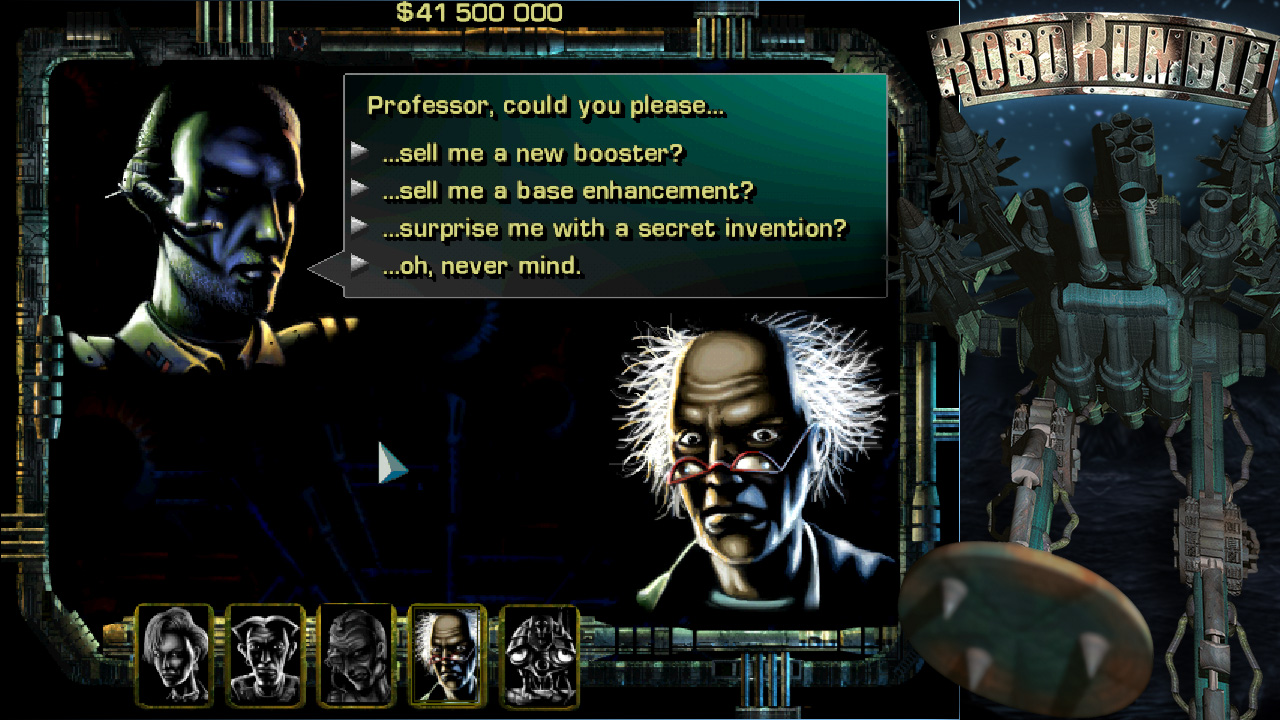 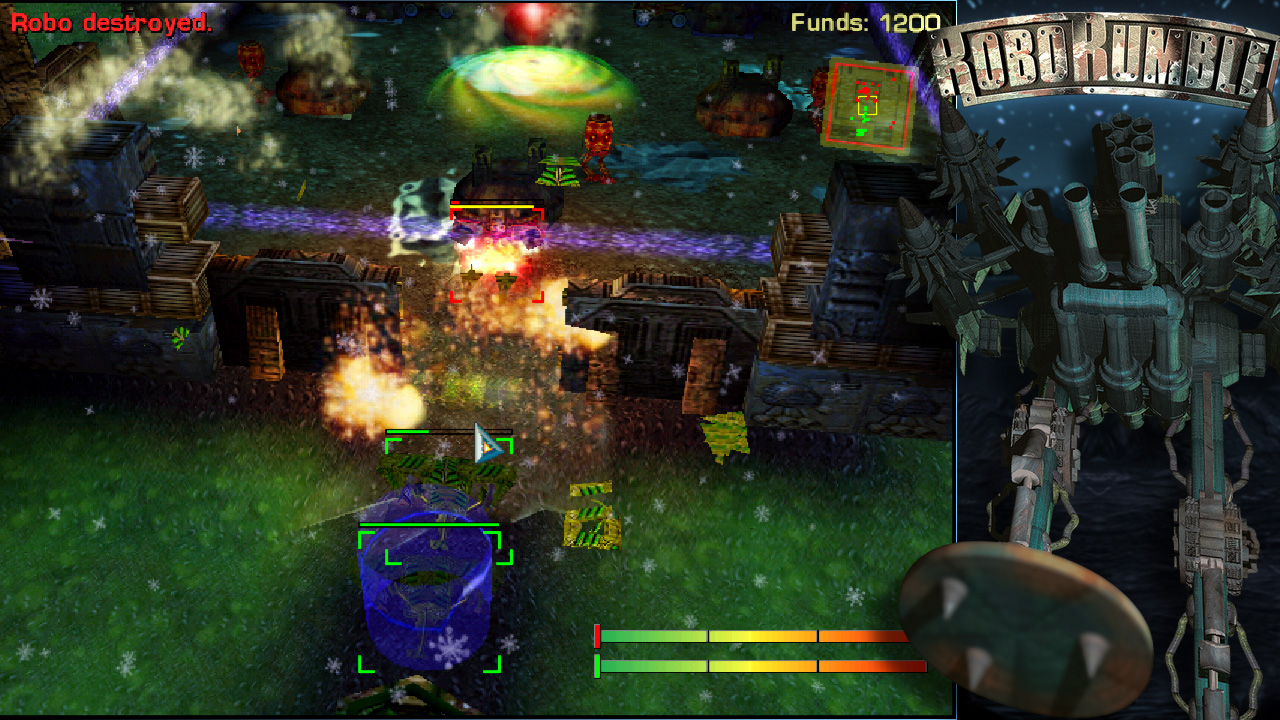 Intro\/plot
I wouldn't call it a marvel, but this game was an interesting experiment. It's so damn old and obscure finding anything on it is difficult. The plot is cheesy but fresh. Rather than focusing on fighting the antagonists directly (the aliens) earth finds evidence that they will be returning in one year to fire a cannon Looney Toons martian style to destroy our planet. You play as the leader of one of the two massive corporate arms dealers specializing in robots, Red Star (who focus on conventional firearms like missiles and machine guns) and Terraflux (who use experimental and odd parts). These two are competeing to see who can produce the better weapons to defend earth and more over who gets that delicious government contract to do so.
Gameplay
The gameplay is like a mix between puzzle and some old antiquated kind of RTS. Each unit is a combination of two parts, the Chassis (which controls movement) and the Weapon (which determines how the unit fights). There is no resource gathering, rather you have a set amount of resource to build robo troops and when they are destroyed you get a FULL refund on them. You only have one building, the base where you build all your robots, if the base suffers a certain amount of damage it explodes destroying all nearby enemies (except under special circumstances). It's anything but easy though, as I've often had difficulty getting past the second level. On top of this you have a certain amount of total funding inbetween missions your corporation has to spend on researching booster mods for your robots and secret technologies. The amount of funding you get is determined by your preformance in the mission (robots lost, time spent, base health, etc.). Controls are garbage, and this isn't a problem with compatibility they always sucked but that just comes down to the games age. It's still playable but I wouldn't cite this as an old paragon of late 90's games. However, If you can get around the lack of control groups and quick select you will find a very challenging game that will keep you frustrated\/busy for hours. Many of the missions do not have a simple "kill the enemy" objective, and if they do it will be behind a unique circumstance. The two factions have completely different play styles and each has unique campaign missions.
Graphics
I've heard this was actually one of the first 3d games. As in TRUE 3d, you can move the camera all over the place. Infact in some versions of the game while paused the camera would automatically sweep the battlefield which was irritating because whatever wonky angle it happened to be at when you unpaused stayed, thankfully this was removed. I can't remember all the camera controls off hand, I think home might be the reset key though. The textures were very good for it's time, if you get nostalgic over those old doom graphics there might be something for you here. On a final note this game is VERY dark at times, which plays into it's creepy atmosphere.
Music
Speaking of creepy, say hello to audio nightmare fuel. I'm not even sure I'd say this game has a soundtrack, yeah there's some techno in there, but for the most part the music consists of these disturbing noises: a metal door slamming shut in the distance, some alien skittering sound, and alot of deep space noises and humming in an otherwise erie silence. Really sets a serious mood. It's in stark contrast to the ludicrous plot like how Red Alert's plot was so juxtaposed to Hell March. Too bad the steam version doesn't have it because, as far as I can tell, 'moving the audio files was too difficult,' but oh well, at least I'm no longer scared after playing this game for more than 5 minutes. You can get the audio back (I'm told) if you put in a disk copy of the game that has the music on it but honestly this is fraudulant buisness.
Compatibility
Yeah, it sucks, the game breaks if you alt tab, but at least it runs on Windows 10, so that's something. I wish there were more people that knew about this and who would work on it but I haven't even been able to find a fan forum on it. It doesn't help that the game is originally German.
In Conclusion
Buy something else if you want a good old RTS that will easy you into good game play. This game feels sad and lonely right now, there are several other old games like Transport Tycoon deluxe, Seven Kingdoms: Ancient Adversaries, and Red alert which have been refounded as Freeware projects by fans but this game remains untouched. So barring further updates, buy this game if you want a masochistic real time puzzle game that is marking down every error in every level you beat.

One last thing
Steam seems to have a bug with this game where it thinks the launcher is the game itself so what happens is, the launcher opens, you use it to open the game and then the launcher closes so steam doesn't realize your playing. It's a minor thing but that's why most people only have "0.1 hours played".. Warning: might be influenced by nostalgia
I'm really happy to have found this little gem on steam :)
I've lost my original CD over 10 years ago and never could get hold of a copy ever since

RoboRumble is a nice little strategy game that's tough as nails and doesn't hold your hand.
It's difficulty can be quite overwhelming at first, if you aren't prepared for the challenge.
Every one of the 31 missions of the solo campaign is kind of a puzzle on it's own, figuring out a working strategy may take some time, but is all the more rewarding after all!

I recommend it for players that like to show some love towards older unique games :)
Some people reported technical difficulties, I can't really comment on that - I had no problems running the game on windows 7 with a glide wrapper
If you ever have problems playing through the campaigns, I'll shamelessly refer to my walkthrough here on steam, it offers working strategies for every mission! Cheers!