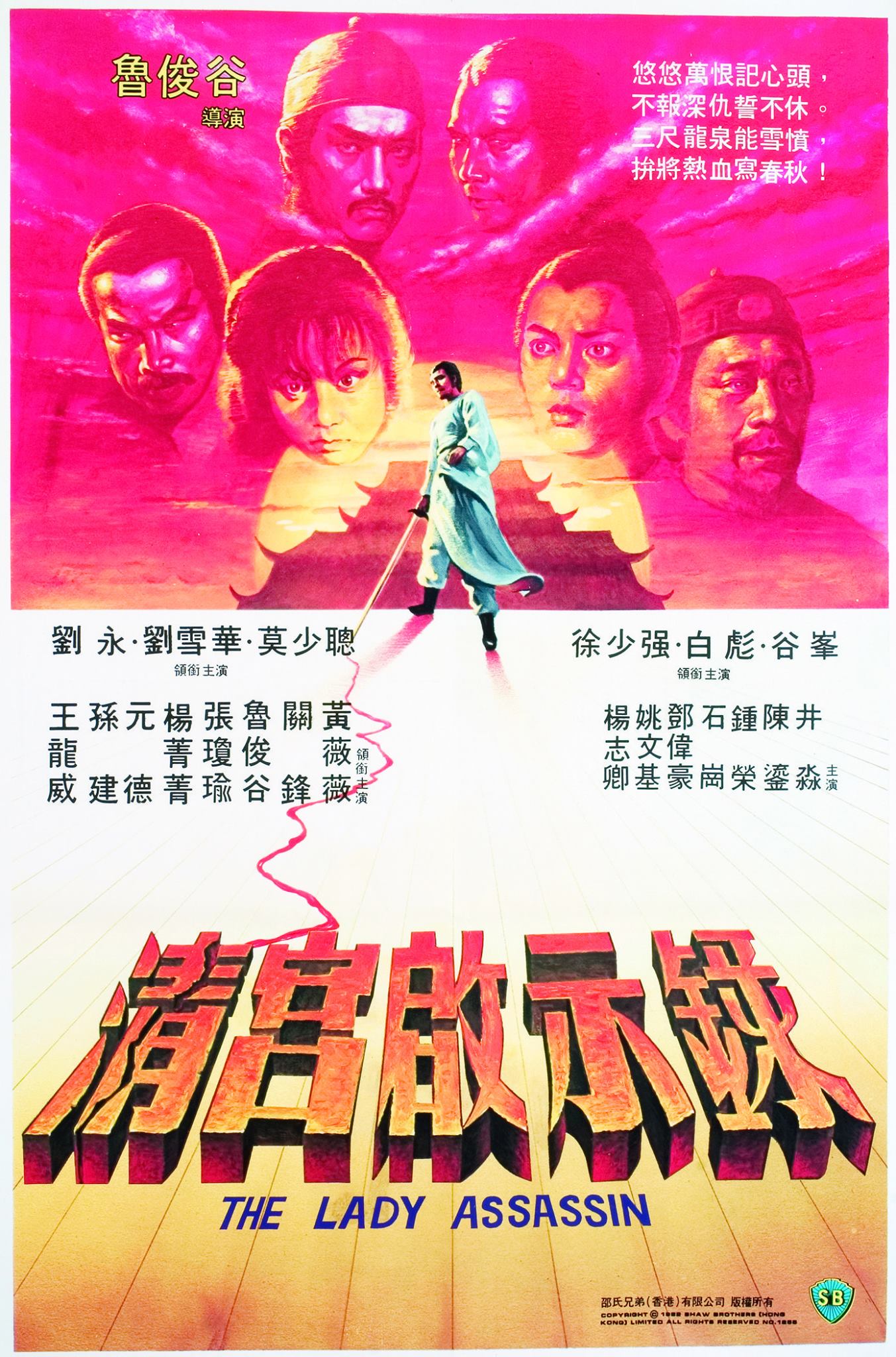 Just to add something - the other reviewer points out a plot twist regarding altering a character on a written will as being similar to another kung fu movie of the time. Please also compare this film to "Rebellious Reign" from 1980 and you will find other plot similarities. There are so many in fact that I have to consider this film as a remake of the earlier. The really weird part is actor Norman Chu plays in both movies. In the earlier movie he is the 14th prince. In this movie he is the bodyguard of the 4th prince. Actually, I like him better as the good guy despite his many roles as bad guys. Review-wise, this is an excellent kung fu movie, a good example of Shaw Studios going out on top.
THE LADY ASSASSIN (1982) is another entertaining kung fu/swordplay/costume adventure from Hong Kong's Shaw Bros. studio. It deals with a battle over succession to the Ching dynasty throne and the various kung fu fighters who get involved on behalf of the opposing factions. It starts out when the 4th Prince, one of over a dozen heirs eligible to succeed the Emperor, solicits a scholar for help and agrees to lift Ching-instituted sanctions on the Han majority if the scholar, a noted opponent of the Ching regime, will alter a letter on the imperial decree of succession so that the next in line is not the designated 14th Prince, as specified in the decree signed by the dying Emperor, but the 4th. Upon the death of the Emperor, the 4th Prince ascends to the throne and proceeds to betray the ones who'd aided in the trickery--the scholar, Lui Liu Niang, and his pretty niece, fighting femme Si Niang. The rest of the film involves the new Emperor's attempts to suppress dissent, fend off assassination attempts and cover up the forgery that put him on the throne.

(The plot twist involving the alteration of a letter on the decree seemed awfully familiar to me, so I checked my notes and confirmed that it was also in 18 BRONZEMEN II, from 1976, also reviewed on this site, in which Carter Wong played the 4th prince.)

The cast is filled with notable kung fu regulars. Jason Pai Piao (THE MAGNIFICENT KICK) plays a kung fu expert hired as a bodyguard by the 4th Prince. Norman Chu (aka Tsui Siu-Keung, star of numerous kung fu films over a 20-year span, from FLYING GUILLOTINE to WING CHUN) plays Tsang Jing, the 14th Prince's bodyguard and the one who puts up the biggest fight against the usurper. Liu Yung (CONVICT KILLER, EMPEROR CHIEN LUNG) plays the 4th Prince-turned-Emperor. Max Mok (ONCE UPON A TIME IN CHINA 2) plays the wronged 14th Prince. Kung fu vet Wang Lung Wei (SHAOLIN TEMPLE, MARTIAL CLUB) plays a corrupt official at court who goes along with the deception and helps the new Emperor fight off his opponents. Yuen Tak (AMBITIOUS KUNG FU GIRL) and Sun Chien (one of the Five Venoms) play rebels helping the scholar and his niece. Shaw Bros. stalwart Ku Feng plays the esteemed scholar who is misused by the 4th Prince. So there are plenty of skilled fighters in a constant stream of under-cranked fast-and-furious fights staged amidst all sorts of impressive Shaw Bros. sets, including the "Just and Open" Hall wherein the imperial decree is well hidden and must be found and removed in one suspenseful scene and then returned with the alteration.

There are four interesting and attractive actresses on hand and all participate fully in the fight scenes as well. Chu's character is aided by two cute loyal fighting assistants, Jade and Pearl (Yang Ching Ching, from 8-DIAGRAM POLE FIGHTER, and Cheung King Yue, who's new to me). Wong Mei Mei (AMBITIOUS KUNG FU GIRL), also new to me, plays the scholar's fighting daughter. And, most importantly, Liu Hsueh-hua (BASTARD SWORDSMAN) plays Si Niang, a fighter for the rebels and niece of the scholar. Miss Liu (aka Lau Suet Wah), is quite a forceful actress with strong features whom I've noticed in a few other early 1980s SB spectaculars, including HOLY FLAME OF THE MARTIAL WORLD, in which the then-23-year-old actress played the aged, white-haired Grand Master of the all-female Erh Mei Sect.

The LADY ASSASSIN title here is somewhat misleading because Si Niang never actually sets out to be an assassin; she's simply assisting her uncle and his allies in fighting for their country and when she kills, it's arguably self-defense and not assassination. Also, she's one of an ensemble cast, sharing the narrative chiefly with the characters played by Liu Yung, Norman Chu, and Jason Pai Piao, who get most of the action scenes anyway. In fact, one of the problems with the film is that no one steps up to be the central hero of the piece. Both Miss Liu and Norman Chu would qualify, yet there are long stretches without them. Liu Yung, as the corrupt 4th Prince-turned-Emperor, seems to have more screen time than anyone else. Even so, we do get to see a lot of Miss Liu, who is attractive, energetic and always fun to watch and a worthy addition to the pantheon of dynamic Shaw Bros. female stars.

While the plot is engaging, it suffers from too fast a pace and the dropping of characters and plot strands arbitrarily, not to mention an abrupt ending. But at least we're never bored. Above all, it's a good-looking film with a great cast and large helpings of full-out fight scenes with all the requisite acrobatic flips, high leaps and flying swords and daggers you could want. Its hyperactive style should be familiar to fans who've seen other films by the same director, Lu Chun Ku, including HOLY FLAME OF THE MARTIAL WORLD, SECRET SERVICE OF THE IMPERIAL COURT, AMBITIOUS KUNG FU GIRL, all of which are also reviewed on this site, and BASTARD SWORDSMAN and RETURN OF BASTARD SWORDSMAN. (He also directed the old-school kung fu classic, HELL'S WINDSTAFF.)