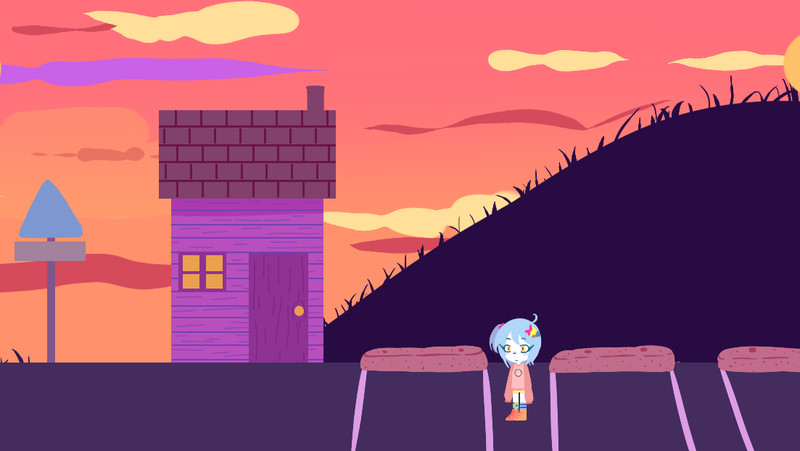 A lone girl is walking down a street one evening, graced in a world of beautiful colors. She came to this cute little suburbia to talk to her boyfriend, who's not been answering her calls for the last few days. Things haven't been great between them recently, so she's gone to see him face to face. She hopes everything will be okay.

PeeTee Babybuu is an original sidescrolling adventure game where you interact with items and NPCs to progress, overcoming cryptic obstacles, and taking in the atmosphere and story. Pay attention and immerse yourself to pick up on hints to progress forward. This neighborhood hides many secrets.

Features:
-Custom and colorful drawn art.
-An original soundtrack helping strike an immersive atmosphere.
-A unique narrative dealing with insightful and meaningful themes.
-Selective voice acting to heighten the mood.
-An experience that may stick with you. 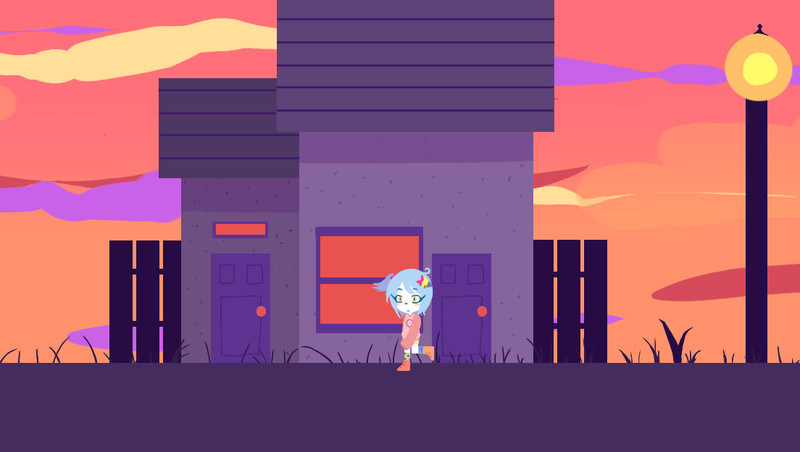 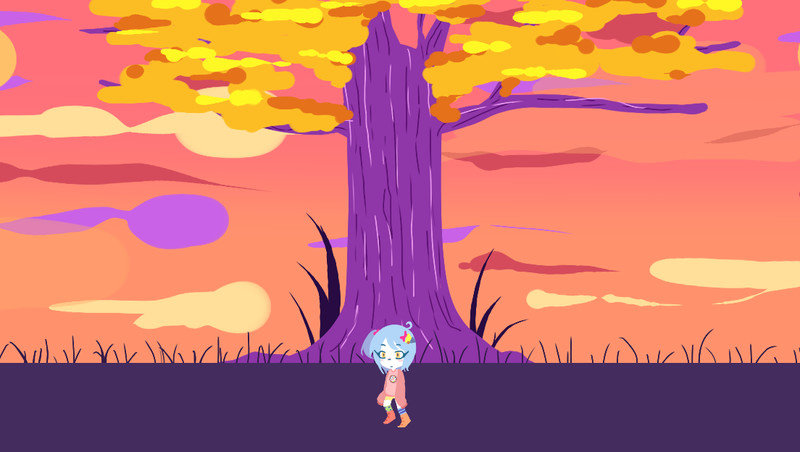 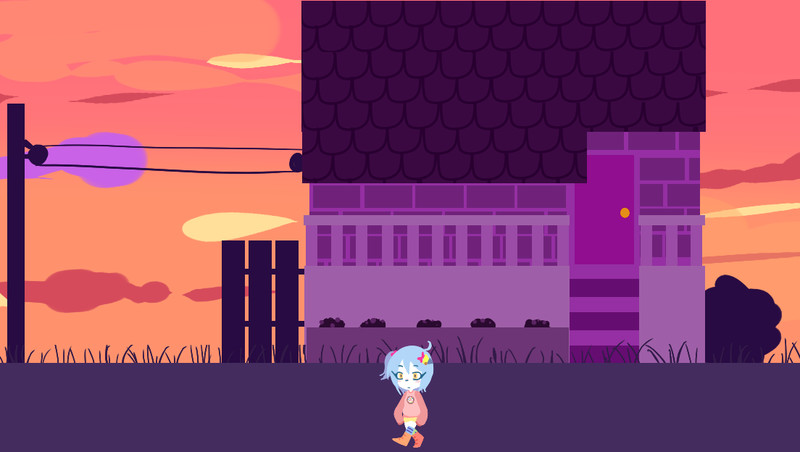 Here's Yai Gameworks Release Plans for the next 4 Months (July - November 2018):
I have been working so hard to be able to pull this off, but finally I think I can fully announce the line-up of games that Yai Gameworks will be releasing between the end of July and the end of November 2018. I have been working really hard since the year began, juggling a lot of projects, and there's still more to finish and juggle after this, but finally far enough along to announce this properly. Here's what Yai Gameworks will be releasing over the next few months:

https://store.steampowered.com/app/727720/Found_Horror_Game_11exe/
"Found Horror Game 11.exe" will be releasing between July 27th to August 6th for $3.99 USD. Follow the story of Ina, a gas station attendant, in an episodic horror game where the community must work a bit together to unlock the next sequence of the game.

https://store.steampowered.com/app/680300/PeeTee_Babybuu/
"PeeTee Babybuu" will release between August 27th and September 4th for $2.99 USD (with the Soundtrack and Art collection available for an additional $1.99 via DLC).

https://store.steampowered.com/app/428860/Red_Haze/
"Red Haze" will have it's big content update between September 28th to October 12th as a free update to the game (but shortly the price of Red Haze will go up to $2.99 USD).

The Store Page is not live yet, but at this time there will also release a new spin-off Red Haze game known as, "Dusk Golem's Red Haze of Horror 3D", which will cost $2.99 USD as well, though those that posted in the Red Haze Steam topic before this announcement was posted and followed the instructions will get a key for the game early.

There is not Steam Page for it yet, but in September to October Rincs and I will be releasing a short horror game we both made involving a bag store. More details to come, this one is working on a strict time table.

There is no Store Page yet, but in releasing on October 30th, 2018 for free will be "Horror Game Anthology", a horror game anthology with short horror games made by different indie horror game developers. I'm holding and compiling the anthology, but it won't release under Yai Gameworks, but I will post the Store Page when that goes live.

Beyond that is an enigma for now. As long as I don't have serious health or livelihood issues or anything of the like, this WILL be concrete. I had chosen from past mishaps and bad judgement to hold off revealing these dates until they were near certain, other projects are not certain right now so will see them down the line. I hope you guys enjoy the sorta' rapid 1-month apart releases I'll be doing over the next few months!. Found Horror Game 11.exe out now:
https://store.steampowered.com/app/727720/Found_Horror_Game_11exe/

It just released for $3.99 USD (with a 5% off discount on release, and an additional 5% off if you buy it off of the Yai Gameworks Complete Bundles). It's an episodic game of sorts using community involvement, Game 2 will unlock when players find the Red Circle, Blue Triangle, and Yellow Square in Game 1, but the earliest Game 2 will release will be next Monday, as one of my closest friends committed suicide on Monday, and dealing with some grief and doing some things this weekend as a result. 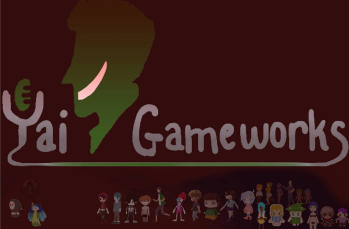 [yaigameworks.bandcamp.com]
I've released a 320-song Album for music from all of my games over ...[yaigameworks.bandcamp.com]
The full album of 320 songs is available there in the link above if you click it, music from my last 5 years of game making. Can listen to it freely, though I do highly appreciate support if you decide to buy the whole album for $8 USD (or can buy individual songs for $0.50 USD).

This album is a collection of the entire original soundtrack for the games I released during my first five years of making games (between 2013 - 2018). It includes the original and able-to-distribute music for Blank Slate (original Ludum Dare version), Girl's Graveyard, Close Your Eyes [Original Version], Take the Dream IX, Red Haze, Cootie Patootie [Original Version], Close Me, Please Love My Computer Game, Found Horror Game 11.exe, and Dusk Golem's Red Haze of Horror 3D, as well as some scrapped songs. This does not include outside tracks as that would've needed me to re-license everything again, and decided to keep this to the original songs by myself (and a few by friends I have been given complete permission for free reign over). All come in .mp3 format. I hope to keep surprising with all that I do. The money earned from this is going right back into future projects.. Yai Gameworks 2019 Questionnaire:
https://goo.gl/forms/3Q4MfT4vLaNSiUjx2

I very much appreciate if people fill out this Google Doc form, it will be running from February 13th to the 18th and involves a number of questions who's answers I'll be collecting for data for the future.

Red Haze will be receiving a small update on February 28th, and several other smaller updates at the last day of every month up until the Big Content Update hits.

Blossoming Yandere will release in March or April of this year:
https://store.steampowered.com/app/660800/Blossoming_Yandere/

More news, info and questions within the form. Thank you for your time.. Yai Gameworks Developer Page ; Summer Sale Deals:

Yai Gameworks Steam Developer Page is now live!
You can follow the page to receive notifications when we release new games, plus is the new developer page for us on Steam so shows a lot of what we're up to actively (which frankly, is a lot. Despite delays, things are coming along nicely).

Today also marks the beginning of the 2018 Steam Summer Sale! All of Yai Gameworks' catalog of games will be on sale. Most notably, Red Haze will be the cheapest price it'll be for years, once the Summer Sale is up I'm updating the price from $1.99 USD to $2.99 USD for the upcoming big content patch update, if you guys don't own Red Haze but want it now will be the best time to purchase it. Close Me, Close Me's extended New Game+ campaign & soundtrack DLC, and Close Your Eyes' Girl's Graveyard and soundtrack DLC all will be on sale as well.

If you own Red Haze before July 8th, make sure to read and follow the instructions here to get a secret surprise in a month or two: https://steamcommunity.com/games/428860/announcements/detail/166452...

I hope you guys are having a wonderful summer! Will be releasing a few things within the next few months I hope to surprise you all with.. Close Your Eyes -Anniversary Remake- OUT NOW!!:
https://store.steampowered.com/app/706710/Close_Your_Eyes_Anniversa...

Close Your Eyes -Anniversary Remake- is now out in Steam Early Access for $4.99 USD with a 10% launch discount (this will be the cheapest the game will be in at the very least the next two years, the game will gradually raise in price as more is added to the game). At Early Access launch, I am actively seeking back feedback and going to work closely with the community to shape up the game. At Early Access launch, the full 'Girl's Graveyard' remake is included, with 1-2 hours of gameplay. The 'Close Your Eyes' remake first hour or so is playable, up until the Judith Manor section of the game. 'Close Your Eyes - The Twisted Puzzle' is included, unlocked after 10 achievements in-game are completed, and has a few puzzle solution changes, a few new hidden things, and should give people a varying amount of gameplay time (depending how good they are at the puzzles).

I hope you guys enjoy, up until the Close Your Eyes Remake is completed, there will be fairly regular updates. You can play up to the current cut-off point and load your save file when new updates hit to continue where you left off. I look forward to communicating with everyone over the course of development, and hope you all enjoy the game!