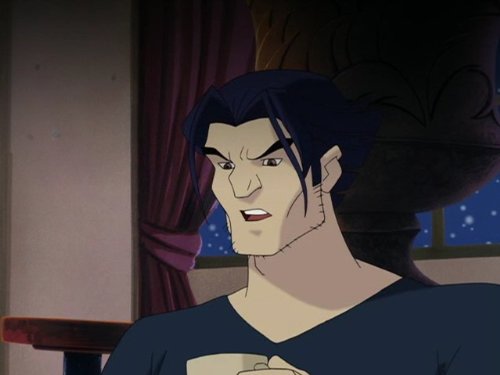 It's Christmas time and a mysterious "angel" has been sighted in New York City, saving those in need.
X-Men Evolution isn't a fantastic show. It's a solid adaptation with many strengths and a few weaknesses (Poor Kitty, who is my all time favorite character, is "like totally" terribly adapted, and Spyke is... well, Spyke) but they're not detrimental to the show. Still, this show must live in the shadow of the fantastic X-Men: The Animated Series, and unlike the original, this series didn't really have any classic episodes.

Except for this one.

"On Angel's Wings" is not a typical episode of this show. Most of the cast is gone, except for a rare Rogue-Cyclops pairing, but even then, they are relegated to the sidelines, as the real star of this episode is Angel himself.

Burdened by his gift, so well portrayed in the animation that he didn't actually have to say it, he is still trying to find a way to use it. And he does, right before, appropriately enough, Christmas. He goes around New York helping innocent people who then spread the tale of Angel, which is what puts Rogue and Cy on the case. But of course, another is on his tail. Magneto intervenes in an attempt to turn public opinion against Angel, which leads to a heartbreaking scene as he watches the little girl he saved sleep in the hospital, not knowing if she's going to be okay. The episode then plays out in a mostly typical fashion: a showdown with Magneto. But even that is wonderfully done. They return to the hospital, and Angel decides not to go with them. Then the little girl awakes, and...

The episode closes in my favorite sequence from the series, a mostly silent except for music montage of all our X-Men as they celebrate Christmas (and Hanukkah!)It's sweet, it's moving, and it exemplifies what I love about this episode.

Every other episode of this show is loud and fast, as they should be for a kids comic show. But this episode, like Angel himself, is somber and introspective. All of the best moments and emotions are conveyed simply through the animation and the music; there is no unnecessary dialogue to bog everything down. Even the big action scene at the end is rather restrained and quiet. In the episode those making the show take full advantage of their medium, and they do so wonderfully.

This is not a typical episode of the show, sure, but it is its best. It stands out from the pack and defines itself as a classic that could stand up there with those from the original series.