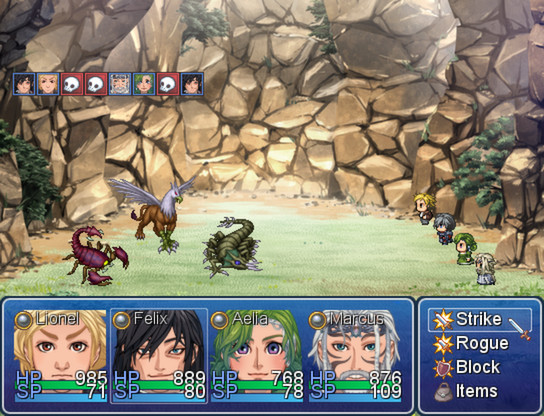 LEGIONWOOD 2: RISE OF THE ETERNAL'S REALM is an epic fantasy Role Playing Game (RPG) in the style of the classics of yesteryear. Playing as an elite imperial soldier trying to protect their homeland, you'll get to explore a massive, fully detailed medieval empire filled with daring adventures, outlandish treasures and dramatic conflicts. Along the way, you'll have to contend with the likes of political corruption, zombie hordes, the onset of war and a game world that changes depending on your choices and actions. Get ready to pick a side on the stage of history. Will you be the one who saves Legionwood, or will you be the one who dooms it to an age of darkness? 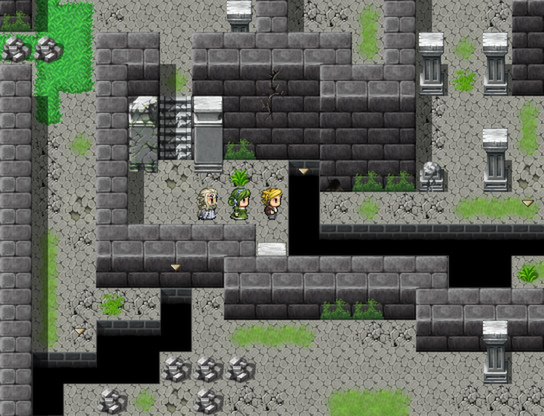 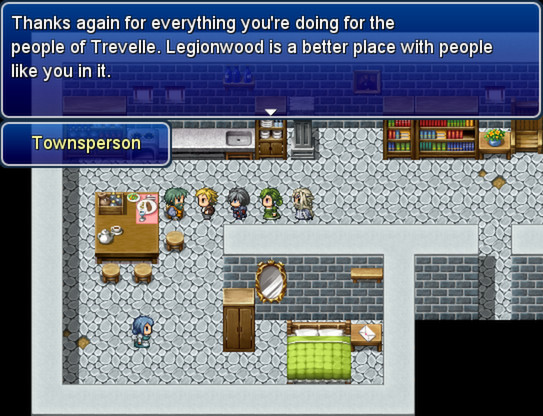 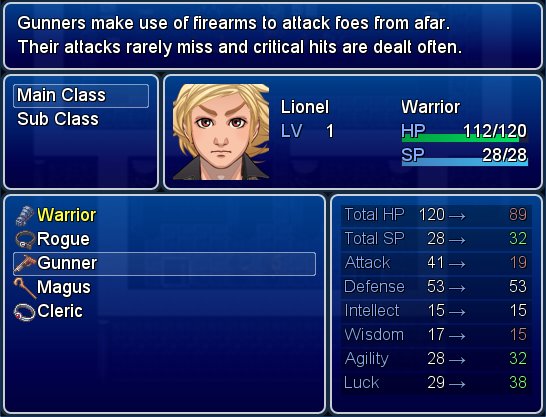 Finally beat the game! Well, one of several endings. I have to say that this game is an exceptional turn based RPG. Here are a few reasons that I personally enjoyed the game:

The class system is way more balanced than Final Fantasy ever achieved. With the right combination of skills and equipment, you can make every class a useful one. Every character can be developed however you see fit. There is a lot of replay value in just trying out differently developed characters.

There are a lot of side quests, but nothing that you have to devote hundreds of hours to complete.

The story line is fantastic. It's not over saturated with juvenile snark like most modern games in the genre. Its a story that grabs you, and compells you to keep playing. Apparently there are several endings, and decisions you make can affect the endings and storyline. That also adds to the replay value.

The difficulty is hard, but reasonable. You have to apply thought and strategy to get through it, which means it doesn't get very repetitive (except for later dungeons, where the switching mechanisms can drive you nuts!) But not so nuts that you throw the controller and give up. A lot of people complain about the difficulty, but if any of you remember playing final fantasy 1 and getting off your ship at the wrong port, or playing Dragon Warrior 1 and crossing one too many bridges, the difficulty doesn't even come close to those days.

The soundtrack is really good. I'm not a musical person, but I appreciated the variety of background music. It set the mood for the different scenes very well.

I'd give this an 8\/10, and I personally can't wait to see another Legionwood game.

. This game is nothing more than a quick cash in. The gameplay is unengaging. The cast is uninteresting and the world lacks character. There is promise here with the morality system and job combinations, but a lot more development time is needed to reach it. As it stands, this game isn't worth the price they are asking for it, or any price for that matter. It should be free. If you want something made with RPG Maker that is worth your time and money get To The Moon, Deadly Sin 2, Aveyond, or Skyborn.. Legionwood 2: Rise of the Eternal's Realm is a classic RPG game set in the expansive world of legionwood. It follows 1000 years after the first game Legionwood 1. Another problem arrises after 1000 years after Lann (Gaia) kills Castoth and it is up to you to save Legionwood once more.

Legionwood 2 is a very difficult game in which requires more planning and quick thinking than traditional RPG games. It offers extensive character customisation, allowing you to choose the class of each character given to you. Legionwood 2 offers non-linear gameplay and gives many optional side quests to explore and conquer as well.

Legionwood 2 has a morality system as well whether you will be hailed as a hero in the end or be dispised by many for your cunning acts. Apart from the morality system, certain actions and decisions and completion of quests would also contribute to the final ending. Simply saying, Legionwood 2 is not a 1 time affair. It has great replay value in that aspect.

It offers around 21+ hours of gameplay if you are to finish the game once through and it is a fully enjoyable 21 hours of gameplay. For those who would like a very challenging traditional RPG game, this is the game for you! (The battles are very difficult if you do not plan, you have been warned). This game is well made no doubt and you can feel that DarkGaia is a competent game designer. But this game feels extremely rushed and unpolished. I expected more of this game. I'd like to make this review short and to the point so I'll just dive into it.

STORY
Compared to the first game this game feels more like a spin-off story than a completed sequel. Although the storytelling and the writing is very good i still feel that alot more story could had been mashed in there. I cleared the final dungeon at around 12 hours at level 19. This was just after picking up my last party member. For obvious reasons this left me with a feeling that the game was not really complete. One bonus is that there is quiet alot of optional content in the game that provides more story. That's all fine and dandy but personaly i would had liked to see the main story expanded instead. Out of the six main characters only two of them have any time at all to see any real king of character development. With that said the characters are still very well written and atleast a couple of them are genuinly likeable.

GAMEPLAY
The gameplay is solid but nothing out of the ordinary. The battles are hard at times and can be quiet annoying but the game offers loads of different ways to tackle them. You can for example play a battle slowly with one heavy damage character and three Clerics if that floats your boat. The upside to the difficulty is that i found myself satisfied when i defeated certain bosses. Battles aside the puzzles are mostly frustrating and kinda feel placed in the game to expand the playtime.

GRAPHICS
I like DarkGaias mapping alot. I really feel that he makes the most out of the built in Graphics in every RPG Maker engine. He has a real knack for making all areas feel unique and full of life.

MUSIC
Some really good choises here. I especially like the fantastic battle music from NemesisTheory. There is not much to say about this really. The soundtrack as a whole does it's job well and provides even more atmosphere to the areas and battles of the game.

MINOR POINTS
There are some bugs in the game. It's one of the things that makes the game feel rushed. Overall it's nothing game breaking though and it does not really lower the overall experience that much.

OVERALL
The game is still worth the price in my opinion. You get 10-15 hours of really solid old-school gameplay out of it. But you better be sure that you enjoy the SNES era of JRPGs because this game is not for everyone.
. Just started this game can already tell its 10\/10 im old school games like this are good ways to releave stress. for 1.25$ cant go wrong. use your mouse or key board... :) such a chill fun game... Legionwood 2:RotER is a solid addition to the RPG maker roster for the cost, but be warned, it is DIFFICULT.

The story and characters are standard RPG fare, with an interesting if somewhat ambiguous class system. If you play this game and get frustrated I recommend reading some of the class guides and planning ahead.

Pros: Again, has everything an RPG needs to work well enough to be worth the purchase cost if you have the stones to finish it. This game is hard enough to be a challenge to even the most hardcore RPG fan.

Cons: This game is PUNISHING. Nearly all fights, even the every few second random battles, are quite hard and cannot be plowed through as in most RPG games. Your characters are extremly weak early in the game, and require some grinding to strengthen yourself each time you progress to new areas\/enemies. Most of the random enemies have some combination of brutal evasion rates, damage type immunities, multiple attacks per round, spellcasting, AND status effects linked to those multiple attacks, and in some cases ALL of the above (Im looking at you Dire Wasps!!!)
Honestly most of this wouldnt be all that bad, except that you do not get a truly dedicated healer, and must rely mostly on items and "guarding" to regenerate health and mana in combat. This will FORCE you to spend alot of your time whittling down enemy groups to the last enemy, and then blinding\/silencing it so it cannot damage you while you slowly regen your characters up for the next fight.

Tips: Save every 2-3 battles in most areas, as the end can come unexpectedly with one unlucky ambush by multiattack enemies.

Stock up on status effect cure items at all times. You will be curing 2-3 times a fight or more against some enemies (Curse you Dire wasps!!!)

Do yourself a favor and read some class guides, the tips therein will save you many tears and much hairpulling.

Keep older weapons around for a while, you never know when that shiney new elemental sword of uberness will be met with a whole area of enemies totally immune to it... sigh.. I am a little dissapointed about this game.
Its nothing like an epic quest. In fact its a very short game (under 10 hours for the first gameplay) and don't even start with the ending(s). The idea of mixed skilled classes is useless because the possible skills are mostly useless. This is the first
RPG I played without a mage and cleric. Fights...yes there are many random ones but you can skip them with running
or equip a trinklet that stops them completely. You don't need the exp. or money because in fights just use one of the
drop agility skills in combination with poison and even the endboss never gets to hit you.