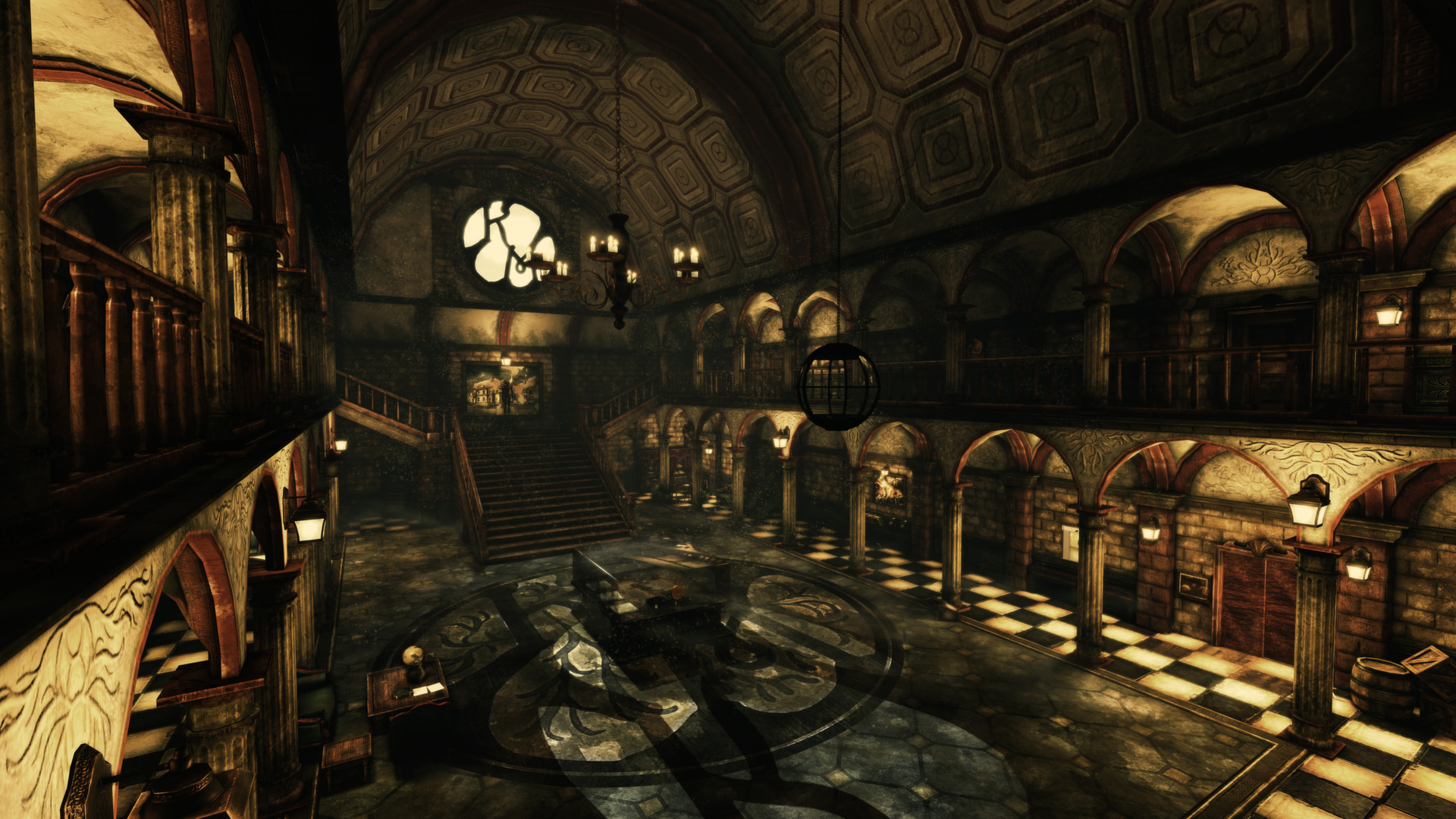 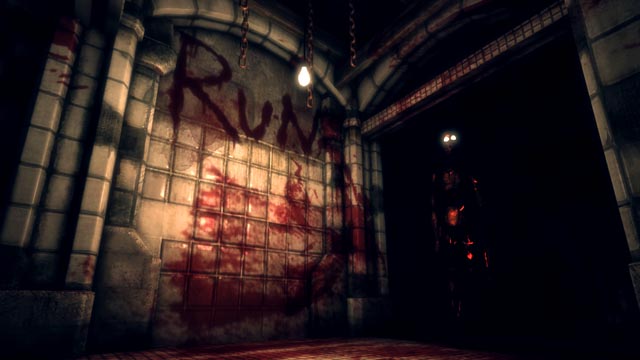 Turn out the lights, take a deep breath, and prepare yourself. Explore the depths of the immersive, atmospheric world of Kraven Manor. Uncover its secrets, solve its mystical puzzles, and face the growing threat within.

Kraven Manor challenges you to explore an expansive manor and discover the mysteries that lurk in its dark corners. You have the power to dynamically alter the layout of your environment by interacting with a miniature scale model of the manor, located in its extravagant entryway.

Dynamically build the manor around you. Find miniature room models and carry them back to an increasingly elaborate scale model of the manor. Adjusting the model causes rooms to move and appear in real space, awaiting your arrival.

Each new room exposes revelations into the troubling past of William Kraven. Face your fears and see if you have what it takes...the doors of Kraven Manor await you. 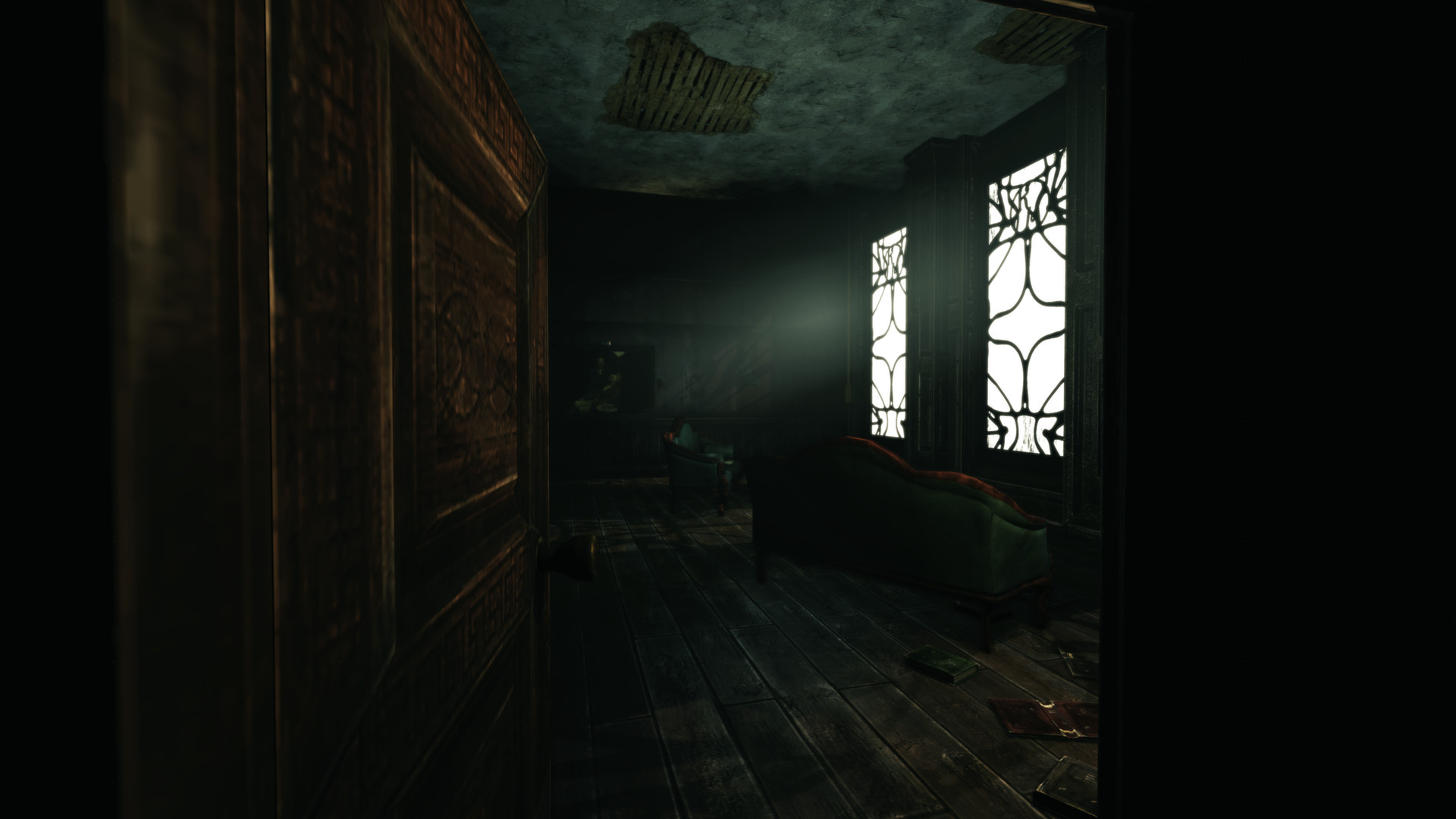 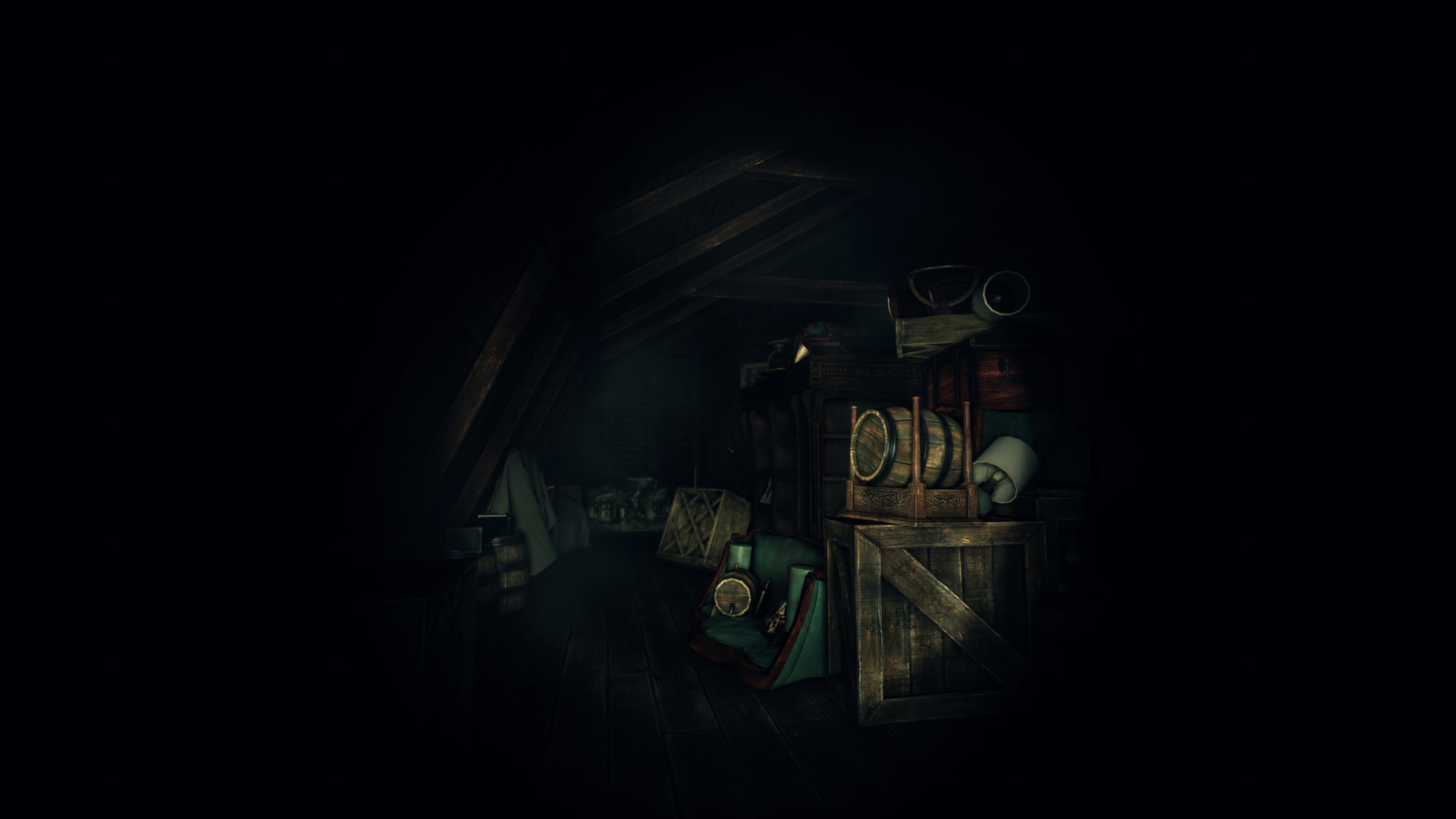 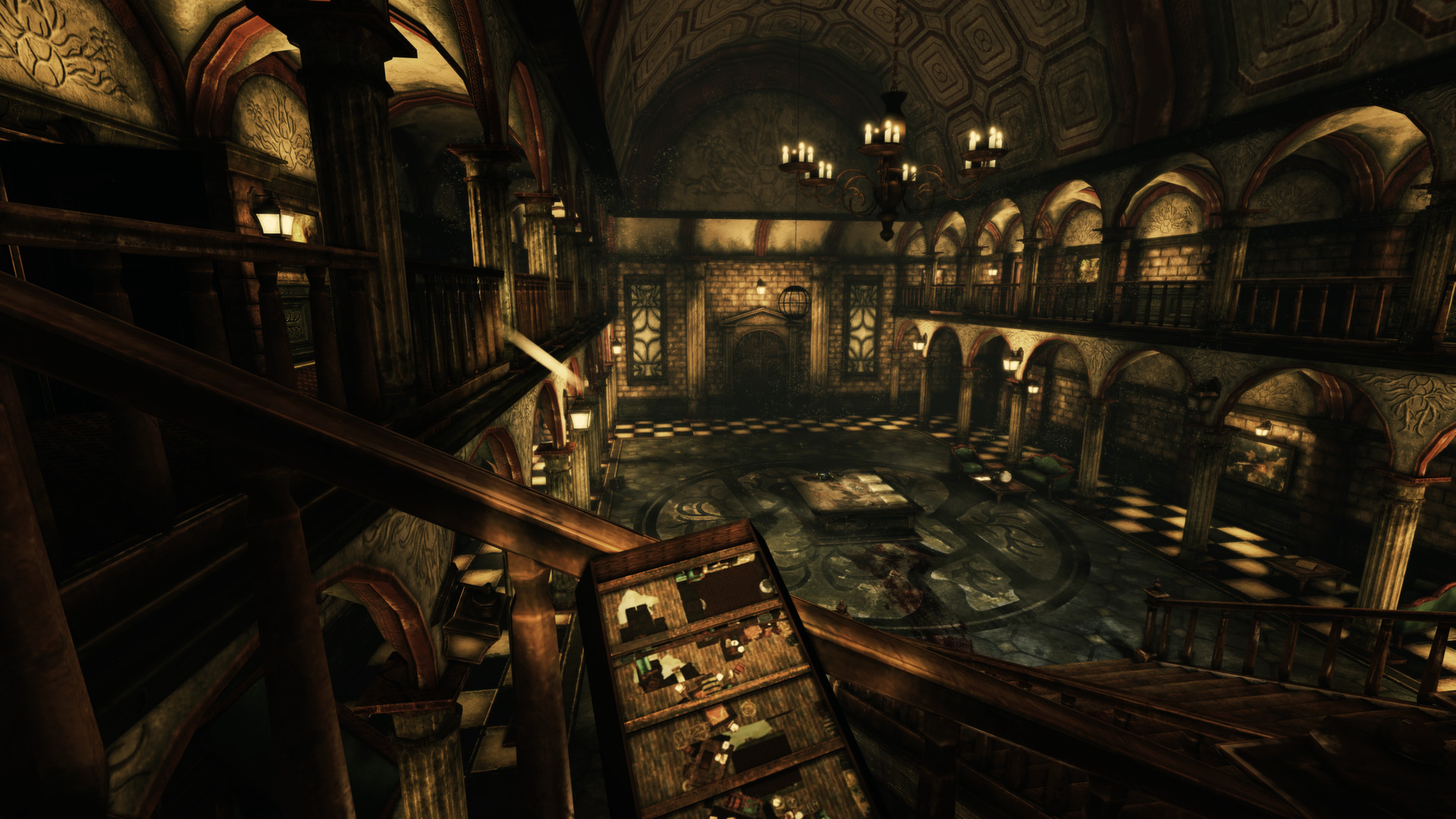 I like the "you put the setting together" concept. Had a good monster. The book mechanic in the library was a good idea. Overall its a pretty good horror game. To god damn short, took me an hour to complete, not that scary, maybe worth half the current price. Vote down as you wish but its the truth, sadly.

I dont understand why or how people can write an essay of a review for it.. Runs poorly not vey well optimised crashes all the time and do not look good either.. As a game, I don't think it really works. If you're looking for terror, this game is a great thriller though... but that's it. In the gaming category it isn't so great. If that's what you're aiming for, look around a little harder (first-person puzzle\/adventure and drama\/terror game - you wont find that here, sorry).

Well, so it begins... you're dumped somehow in an old manor without any clue as to how you fell in such predicament. It's almost like you woke up from a bad dream and there you are. With that, you are left with a flashlight (awesome, and if you choose the hard-game option it may not even work), and you've somehow forgotten how to touch, grab, look, observe, hit, examine, etc. anything that isn't pertaining to your game's progress... no "biggie". As you explore you find that you're ALL alone.... or are you? Nope... and this is a spoiler (so don't read further if you don't want to know this) you find something that may "possibly" be alive... a mannequin.. not just any mannequin, but one made out of copper (what the heck?!... copper for real?). I haven't yet been to the attic, but I already know what the subject of the game might be.... the murderer, the keeper of the manor has been manifesting itself in that mannequin (don't know for sure yet but clues do suggest that). As you move on, you will probably decipher the fact that guests in the manor were pretty much killed by the keeper at some point.

Be careful with most of this game's reviews.... they DID lead me to take the mannequin lightly. Don't let it happen to you, the mannequin is VERY MUCH lethal.

Whew, I took that out of my chest! Well, the biggest issue I had was the fact that the mannequin is indeed lethal, but there are mechanics that just didn't seem to agree with me. Having played games like Zork, Montague's Mount, Riven, etc (and loved them) you do assume the mechanics will be similar. I have to blame myself... I hate spoilers so I didn't look for sample videos (I should've).... anyway, there is no inventory, basically as you would in real life you carry things in front of you, BUT this is what is not very real-life-like... remember the above mentioned? (look, observe, hit, etc) you will soon realize that you are DEFENSELESS in every possible which way.... except for room models, I don't think you can actually carry anything else... a key perhaps, but not much else. That means that if you're attacked in a dark room, you can't swing... despite the fact that the bedroom and library are full of books (and that books have been amazing murder weapons in the past) you can't simply grab one of the damn things and swing them at the dreaded mannequin.

There is no "real" save game feature (I hate that in games).... ok... that's not a big problem for certain games, you complete certain puzzles and there; they save.... NOT this one. This game sometimes saves RIGHT when you're about to enter a room and sometimes, not even. That's a problem when you're done getting a model and just want to put the game down. Such is the case with the bedroom, I am not happy I have to do that sequence again! It should save everytime you place a model on the main counter. Why doesn't it do that?!!!

Anyway, it appears you can't really swing that model at the mannequin's face either (if you needed to).... I imagine myself in this game as a disabled person with a mechanical (crane, hand or device) to carry things with... pretty much.

I am not done, and quite frankly, I am unsure whether I want to play this game again :( The issue is not the fact that is scary (not the biggest problem), but when things are scary and you're somehow stupid or disabled, that's just not nice.. Now, this is one game almost solely dedicated to the notion of SPOOKY. The other recurring theme is MODELS: No, not the wafer-thin things that caper about on cat-walks, but rather a three-dimensional model of the title building and its attendant rooms\/sections (an absolutely ingenious device which you'll just have to play the game to "spoil" for yourself), as well as some of the hands-down scariest bronze statues\/art models you will ever have the good fortune to be terrorized by.

I gotta say, it's always nice to be so pleasantly surprised by a game you didn't even know existed until it was already available in the Steam store (the last such game for yours truly was perhaps Outlast, so this title is in mighty good company therein). This isn't to say there aren't a few problems, however...

Firstly, the Steam asking price is a tad silly for a game which even I managed to complete in under two hours ('cause believe me, I play games kinda sloooooow). The project is apparently the product of university students graduating from a game design course, so within those parameters it's impressive as hell, but it doesn't hurt to recognise that even the very best of such projects can't exactly go head-to-head with the "big boys", especially price-wise.

Secondly, there's a few glitches...on more than one occasion, I had a particular enemy permanently freeze on me; which might almost sound like a "good"\/opportunistic thing, but decidedly less so when you require said enemy to cause damage to something in order for you to progress.

Also, I had a hell of a time getting a couple of objects to successfully interact with what they were SUPPOSED to interact with. I especially had no end of fun trying to get a round ornamental medal thing to go into its appropriate slot in a wall...thought I must be missing something...looked up a video walkthrough and lo and behold, the dude playing it gets it in first go without even trying. One game reboot later and I finally managed it, but again not quite as promptly as Mr Walkthrough did, so...yes, problems, it had a few. I did however break with my usual cheapskate tradition (of waiting for a decent sale) and bought this game smack-dab on its release date, so perhaps these little bugs will be corrected with time...

On the whole, though...VERY impressed. Expect big, big things from the people involved. For now, this one merely qualifies as just a single "big", but there's no doubt there's some talent involved here. If I were their teacher, I would definitely give them an "A" (but not quite an "A+")...but since I'm not a teacher, I'll simply rate them in my standard manor (whoops, make that "manner"), and round off my review with the customary:

www.indiegala.com\/warhammer?src=menu\" target=\"_blank\" rel=\"noopener\" >https:\/\/www.indiegala.com\/warhammer?src=menu<\/a>. great game i recommend this game strongly the game is beautiful and the game keeps you sucked in but though i strongly recommend this game just wait until it goes on sale i bought this not knowing the game was this short and beat it within 2hrs 9.99 is a bit steep for a 2hr game and once you beat it you could probably get through in under an hour so wait til the price drops a bit over all score for me 7\/10 great game near perfect exacution but price compared to length is what will hurt this game