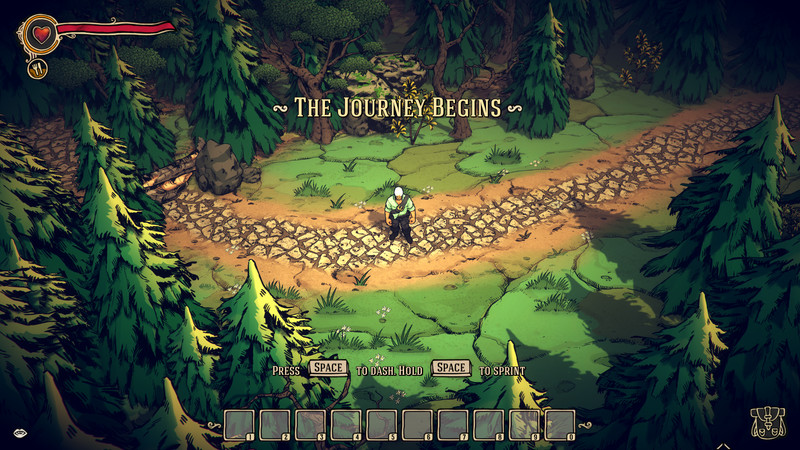 Grimm: Dark Legacy is a tale of deep, dark exploration, hunger, and blood thirsty combat in a medieval setting.

You play the ancestors of the Grimm. Your story takes place inside the Wesen journal featured in the hit NBC TV series.

Hunt, gather, craft, and form a ruthless band of Grimm to defeat humongous hordes of Wesen on your journey. Can you survive? 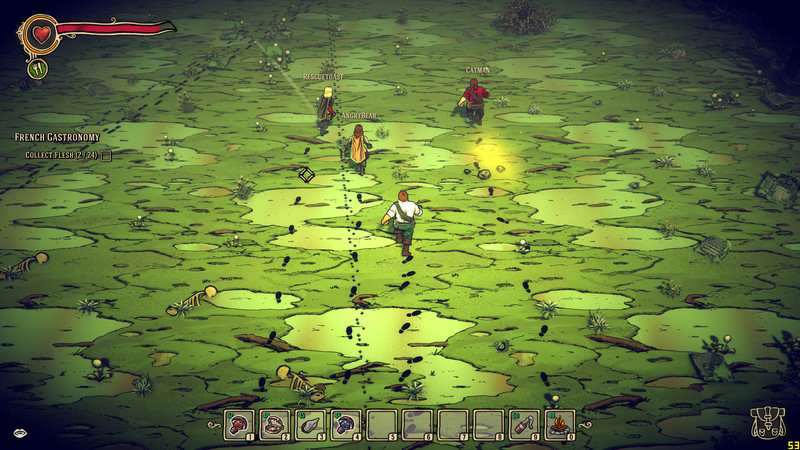 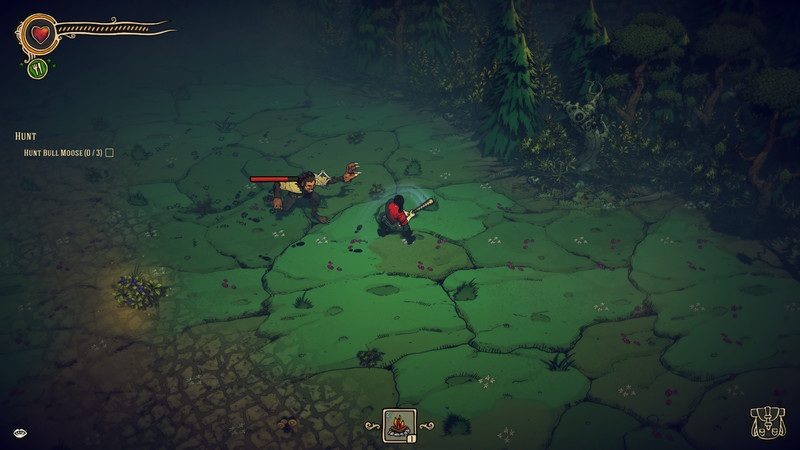 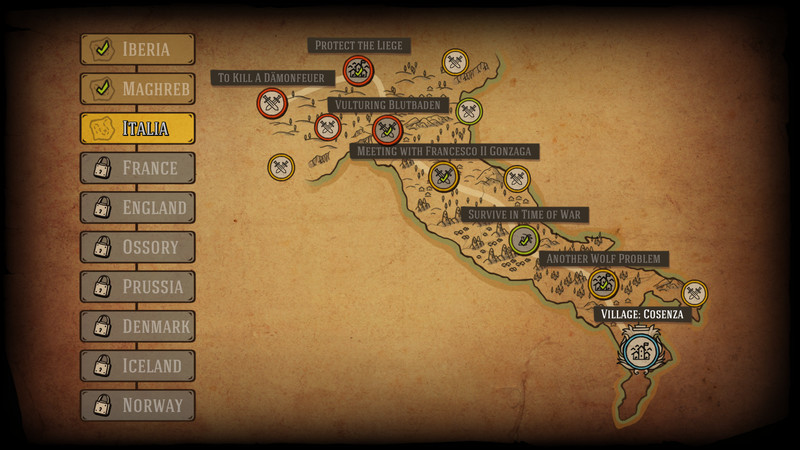 *Edit - I made a few comment updates to this review, the updates are in a single paragraphs wherever you see "*Edit". There is a tiny bit of new information but nothing has been changed otherwise.*

There is a lot of misinformation about this game, and I'm only really posting a review to correct some of it.

First yes, it *currently* is online only because it was meant to be an online game played with others. Nowhere in the description does it say "Single Player". Nowhere. It says it's an online survival game and single player isn't listed anywhere in the tags. And yet people buy it and complain there isn't an offline mode because it didn't hit them over the head enough with the warnings that it's an online game? It gets all the data from the server for the areas and such you're playing in. It's not as if it is just needing an online connection for no good reason. The game was made to be multiplayer and doesn't list itself as single player, and yet so many down vote the game because it doesn't come with something it never said it did. Anyway they're making an offline mode, which I can't say if it's a good idea or not for a game meant to be played online but it's coming down the line.

*Edit - I do admit they could have done a better job explaining this is a hub based "light MMORPG"- and I feel they would have had more sales if they had done that. You see other random people in game if you're in the same town areas as they are and can group up with them to play together as well as friends you invite. Still they never said there was a single player mode anywhere so to complain that it's not single player is odd to me. It would be like complaining Guild Wars 1 didn't have an offline mode. These hub based light MMORPGs usually don't...*

Next the cut scenes - this game is based on the lore from the TV show Grimm. Nick and Hank are looking through one of Nick's books of Grimm for information, and you're basically playing what they're reading about. The cut scenes some people complain about that are just "two guys looking at a book" - that's the whole connection to the TV show and if you've watched Grimm you'll be happy with having that there.

On to the "slowness" of combat. You start out with a huge piece of tree and then a giant club you're fighting with. They are slow because they are meant to be more realistic. You're a Grimm that's stronger than a normal person by far but still these are pretty huge weapons you're swinging. You also start with a shield that's slower because of it's size. Later on you can switch to faster weapons and a much faster shield. Maybe they should have started you out with faster equipment so people would see how the game plays with them from the beginning, but they are an upgrade choice you are supposed to earn as you play.

I've had no issues at all with server lag, but my play time isn't very long yet so I'll keep playing and update a comment here if I do start to have server issues.

*Edit - Still no lag issues for me. The game is made to learn the patterns monsters use and to avoid or block them early. Some people play and think the game is being slow when it's performing like it is supposed to, but others may be out of the two server areas so actually would be having lag. I've not had even the smallest amount personally being a US based player.*

When I connected there was a US server and a server in Europe. Yes, if you are not in those areas maybe you will have issues playing. There isn't just one or two servers that go up to 600 people - if a server in a region gets full another will appear, so you always get to play. You're not locked out if you buy it and there are already 600 people online.

On to character creation - this is a little weird but you do have control over the look of your character it's just you have to let it randomly assign your look and then keep clicking to go through random looks. If you click the gender button on the character creation screen it will randomize your look. To get what you want you have to keep clicking the gender button of your choice and wait until it randomly comes up with a look you like. It's weird and a bit annoying but not unheard of. The way they do it definitely leans towards the "con" side, but you *do* have the ability to keep rolling random looks until you find what you like. So you're not just forced to look one certain way. I'm guessing some people just never pressed the gender buttons up top to see that it randomly changes the look each time you press one or the other.

The game is supposed to feel more like being in the real wilderness, so there are some open stretches without as many things to fight on them as some people are looking for I guess. Having played other "survival" types of games it really isn't too much different than the way a lot of them are made like that.

If you're a Grimm fan you'll probably be pretty happy. Being a Grimm fan myself, I am probably influenced towards liking this a bit more than I would have otherwise. The game is fun to me and I would recommend it.

I can't really say if it should be $15 or $10 though yet because I need to play the game a lot more to decide.

*Edit - Yeah it's worth the $15. The landscape seems repetitive if you stay in the same areas searching for stuff a long time, but the environment does change around a bit as you continue further into the game. I do wish there was more variety earlier on, it's so beautiful, but it does change up slowly. The game also gets much more active as you go along with lots of dangerous creatures all over. It starts up a bit slow with mostly normal woodland creatures but it won't be long until you're swimming in harder and more interesting stuff.*

If you want the solo offline version you'll need to wait until they update it to say it's here. If you like playing multiplayer games with friends on Steam and you both get this, it's pretty decent though. It's also really cool for Grimm fans. Other people may want to wait for a sale to get it.

Like every game that exists you should go check out longer gameplay videos before buying to see if it appeals to you. That's pretty much a given but I felt I'd mention it anyway. The game is quite beautiful but you should see it in action to help you decide if it's what you want or not.. Multi doesn\u00b4t work. Rogue-like-like-like genre.

To be noticed:
- Death changes nothing;
- Unable to customize character;
- No offline mode;. Has nothing to offer besides a nice art style, the gameplay is boring and repetitive.. I think this game has the potential to be really awesome but in its current state, it feels like its missing "nuts and bolts". Its fun going out and doing the "hunts" and getting random stuff but the "stuff" you obtain is ultra simplistic. We are essentially grinding to get hunger\/health and some bombs.

I will give it a thumbs up because I have faith they will tweak the game over time.

1.) The maps need more "meat and potatoes"... Maybe random humonoid patrols or random events... Something to make the world a little bit more alive. It feels like a walk\/run simulator just like every other survival game I have played. It is as if the word "survival" in a game means you need very long travel times.

2.) Itemization... The character can equip 4 items... Primary\/secondary weapon.... A shield... and a "potion" which is like a trinket that grants one benefit such as resistance or more health.... This is way to basic. More slots and more variety for both "trinkets" and weapons is needed.


Overall, the game concept is there but the implementation of how and why is super simplistic.

7\/10 Rating in its current state with massive potential to be a lot better with some patches.. I'll not recommend this game.

The only two good things that i can say is the game has a amazing art and a nice theme, and done.

The soundtrack is annoying after playing more than 2 hours, its pretty the same in all "chapters", the quests are too repetitive along the main campaign, what kept me playing the game was the feeling of progression.

The WORST thing for me is the inactivity of the developers, i tried soo hard to complete 100% this game, i asked soo many times in the community, which is DEAD, but i got no answer, they didnt bother to reply my posts.

It seems they abandoned this game. I feel sorry for every achievement hunter like me who didnt make to complete this game.. Multi doesn\u00b4t work. Grimm is a fantastic mix of survival and rogue-like gameplay that will keep you trying "just one more time". I love the TV show that it's based on, but you don't need any previous knowledge of it to really get into this game. It takes place in the show's universe history, old world europe, where you learn that the world is not only what it seems, but far more dangerous.

The game looks amazing with the style perfectly matching the mood and gameplay. Add to this the developers are exceedingly responsive to players. On launch there was no offline play, then players really wanted it, it was added NEXT update. Fantastic! Which brings me to the co-op aspect. Yes, you can play with friends! Roam the historic countryside killing Wesen (the game's universe term for werewolves, and all other supernatural creatures both good and evil) while arming yourself and just trying to survive with a fellow Grimm, yes please!

I was hoping and expecting good things, and was not disappointed.. I am returning the game. It is slow, it is boring, and other people can randomly enter your isntance and beat quests for you. I see what they were trying to accomplish, but they failed. If this was a solo survival game with cool upgrades and gear, I could see it working. But as a "rougue like" it is pretty lame.