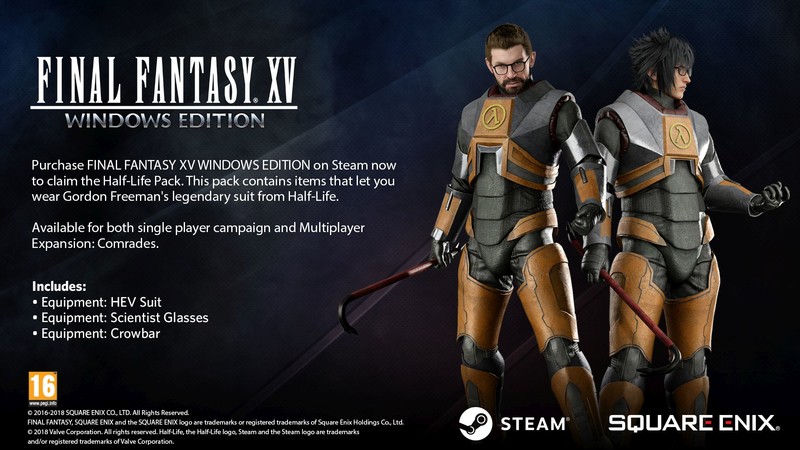 Get ready to be at the centre of the ultimate fantasy adventure, now for Windows PC.

Joined by your closest friends on the roadtrip of a lifetime through a breathtaking open world, witness stunning landscapes and encounter larger-than-life beasts on your journey to reclaim your homeland from an unimaginable foe.

In an action-packed battle system, channel the power of your ancestors to warp effortlessly through the air in thrilling combat, and together with your comrades, master the skills of weaponry, magic and team-based attacks.

Now realised with the power of cutting-edge technology for Windows PCs, including support for high-resolution displays and HDR10, the beautiful and carefully-crafted experience of FINAL FANTASY XV can be explored like never before.

Includes all of the exciting content released as part of continuous game updates (Chapter 13 alternate route, off-road Regalia customisation, character swap feature and more!). And comes with all of content released in the Season Pass - Episode Gladiolus, Episode Prompto, Multiplayer Expansion: Comrades, and Episode Ignis
Get ready to be at the centre of the ultimate fantasy adventure.

DLC:
*Moogle Chocobo Carnival tickets are not included in the FFXV Holiday Pack+. 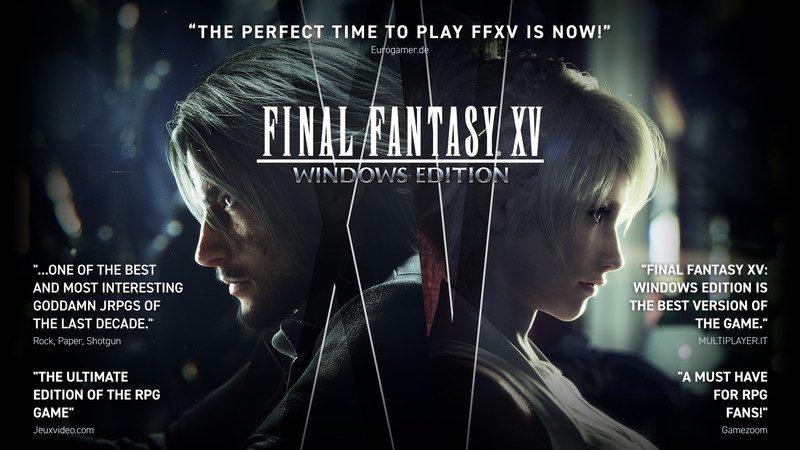 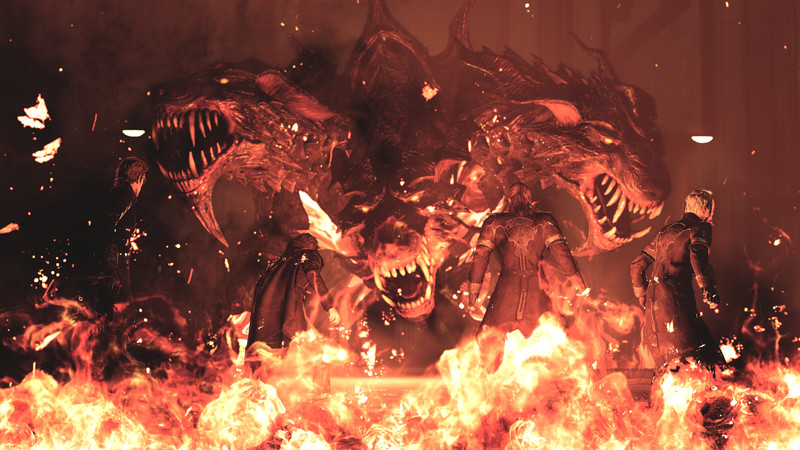 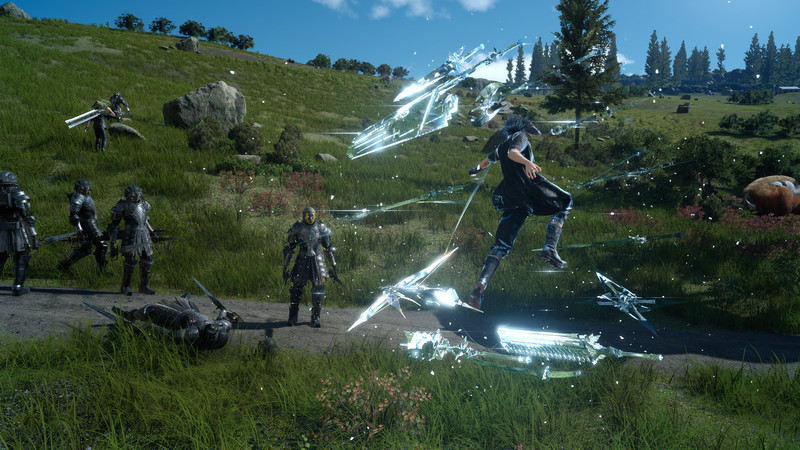 Great bromance.. Had no problems running the game on an GTX 1060 and i7-4790k. Game ran quite smoothly most of the times.

I really wanted to love this game since I've waited so long for it after completing FF13 Lightning Returns, but it turns out that I didn't really love it as much as I wanted to. That doesn't mean I didn't enjoy it, because I enjoyed it a bit as well. I completed FF15 on the PS4 back in 2016 not too long after they released it. Thought I might as well as purchase it on Steam and complete it PC gaming. The main story moves a bit too fast and side quests just feels like a burden and often not very rewarding. A lot of it is the typical "hunt X amount of monsters" or "investigate Y location" for an NPC. There are some side quests that contribute to the lore as well, but you will find that most quests are just extremely boring and demotivating.

They really should have made the monsters a bit more challenging. Because they aren't, the combat system is complete\u2665\u2665\u2665\u2665\u2665\u2665\u2665 I thought this as well while playing on the PS4. You will pretty much hold down the attack button here and there, hold the dodge button, drink some potions or use some elixirs, throw in some warp attacks, and soon the battle will be over. The enemies are almost always pretty easy to kill. I can easily kill some level 45+ MT soldiers that drop from the ship while being level 30. Get low on health? That's OK, just use a potion or an elixir. It really isn't too difficult at all. You can switch from Noctis to anyone of his bros once you spend some AP to unlock a few skill nodes (this definitely wasn't a thing when I first beat the game a few years back, so I'm glad it's there now).

You will do most of your traveling in a car that is called the Regalia and holy mother of God is this vehicle so damnably slow. It will travel at most 50MPH at all times (80KPH to you metric systems), but you can upgrade the max speeds to 70MPH (which still feels slow).

The Astral summons are useful, but there is a catch to it. Astral gods are almost nearly impossible to summon unless the battle goes on for very long (implying that you're in a pinch of some sort). FF10 and 13 summons were just fine. I am not sure where they went wrong with summons in 15. Such a shame, since Astral gods are a big part of the game's lore.

If you're not new to the FF series, it will extremely bother you that your spell and ability casting isn't there. You can craft spells, but it will certainly not feel the same. Spell casting all done using items you can buy in the shops or pick up along your journey; or it can be crafted. If you're not new to FF, this may bother you quite a bit as it did with me.

TLDR, if you're not new to FF games, then this may not be your cup of tea. Main story line is a bit confusing at times and the combat system sucks a bit.. "A fantasy based on reality making it a Final Fantasy not for First timers to the series to play", is what I can collectively say after playing this game and its patched in DLC's.

TO FIRST TIMERS ABOUT A FINAL FANTASY GAME
A Final Fantasy game is unique with its way of representing different themes from different cultures in a game with its story, characters, music and with innovative gameplay mechanics in each new iterations of the franchise. this way, the series gained a following and with its seventh entry, it kinda became an unique JRPG series that millions of people came to know abt, played, loved, and remembered it for generations to come. A good sign for the franchise in the long run, but brought forth more expectations from the millions that liked the game. The series maintained its uniqueness until the thirteenth entry, which split the fans of this series in two.

First time impressions
When you boot up the game and start playing it for the first time, you will be awestruck by how beautiful the game looks graphically, the flashy and animation heavy combat system, the travel on Regalia from different points through the amazing and well detailed world, and the music that makes you feel as if you are in a fantasy world, on a long trip with your companions.

Later Impressions
This is tedious, annoying and confusing, what happened to this guy, why is the combat camera so awful, when will this part of the story end, when will I be out of this goddamn cave,.....are some of the thoughts that will flood your mind after the initial hours blitz by.

STORY OF FFXV
- The game's story is pretty simple, when you look at it in a simple way. you are a prince from a kingdom which is attacked by another rival empire making you a prince who is on the run now to defeat the empire and become the true rightful king. Hmm...this sounds like a generic plot used to death, but no. the simple look up of the story doesn't tell you how that becomes a road trip with a set of bro's as escorts and bodyguard of sorts, meeting different people, making pacts with gods to summon them when you are in a pinch, how the once enemy empire who is supposed to be the villain is reduced to one crazy guy who is not even the king of the empire, but the chancellor.

Hey that sounds interesting, but is it really said in the game ? U see I couldn't understand most of it.
- Well the game has a poor way of presenting the story to the players and to actually get the basic idea to establish the plot, you have to watch a movie, an short anime series and then play the game to understand and process it all. maybe if the devs had made sure that the above mentioned movie and anime short is viewable in the game itself, then that would have been understandable and tends to avoids confusion in the long run.
The story in the main game at least revolving around the bro's and the prince is told somewhat decently until it reaches a point which is where things start to feel rushed. A few parts of the story is told through the DLC's that revolves around the bro's and honestly these DLC's are the saving grace for this game that actually makes me recommend the game here. The Ardyn DLC released is very crucial and if you are planning on getting the game after reading my review, then please get the DLC as well along with the game.


THE GAMEPLAY
Summing it all, its unique in its own way. has its fair share of good and a bit too much bad.
- Combat is button mash heavy but looks flashy as u do it. (is different in each of the DLC's which is fun than the main game)
- Has fishing which gets boring too fast,
- Taking photos of your adventure in the game at the cost of stutters, (PC Exclusive)
- Gorgeous looking open world which is semi empty, but is fun to explore sometime
- Travelling in the car is fun initially, but gets boring and very frustrating at night time in game
- Interesting features with no proper explanation on how to unlock and use them


JUDGEMENT
Even with the amount of cons that manifests in the story and gameplay, I did find a game that was enjoyable and average at best. Its a game that tries to be somewhat unique and give a first timer experience of sorts to a franchise that is well known for being different from other games. And it does achieve the feeling, not without its fair share of flaws that almost destroy what it is trying to achieve like the first time players thing. If you are looking for a action JRPG that is open world, based on reality like our world today, with fantasy elements mixed to it, then go for this game. but if you are looking to enter the franchise as a first timer then its a bad FF to start off.
P.S. get the Ardyn DLC that is available for the game. trust me you will never regret it.. I'm one of the guys who played the first FFXV in PS4 and sure was disappointed. It was incomplete and rushed. So I tried buying the Windows Edition with all episodes to check it out and relieve my frustration over a time. To my surprise, it's definitely improved by a lot, like the Insomnia in the last chapter, enemies, level cap, character select... and most of all, storyline. It felt 'almost' complete. This FF is a tragic story that everyone wouldn't want, but it's one of the element of this installment, without it, it's pointless. For the first timers or those who've played the first FFXV, go buy and try it.

"You guys.... are the best." 8\/10. This game has incredible graphics and what seems like a limitless number of side quests that keep you entertained when you don't feel like playing the main story. Definitely one of the best FF games i've ever played.