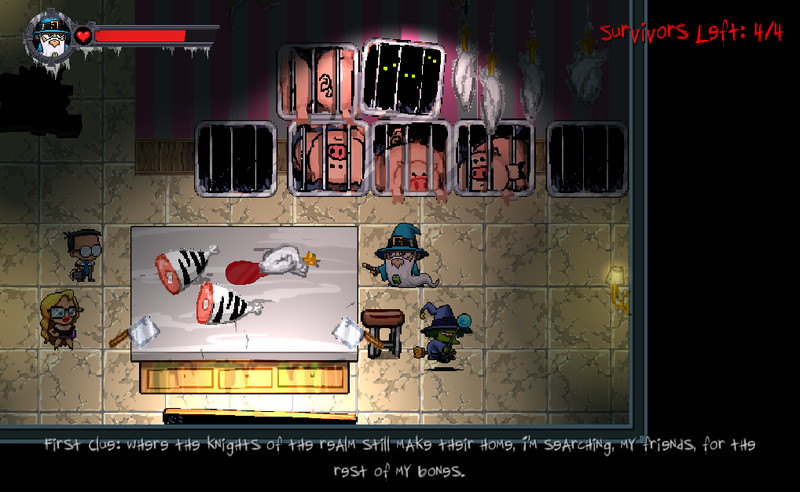 Devil's Bluff is a highly social online murder-mystery where a group of friends are invited to the exclusive annual Halloween tradition of the Crawley Mansion, high atop the infamous Devil’s Bluff. Each year, guests are invited to take part in a costumed scavenger hunt on the expansive grounds of the reportedly haunted estate. The catch? There's a killer in your midst, and if you can't finish the Hunt, they've made a promise to finish all of you. 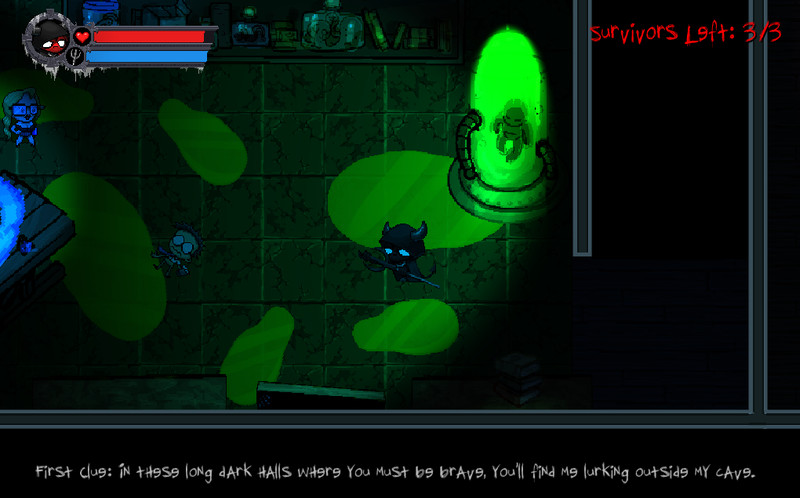 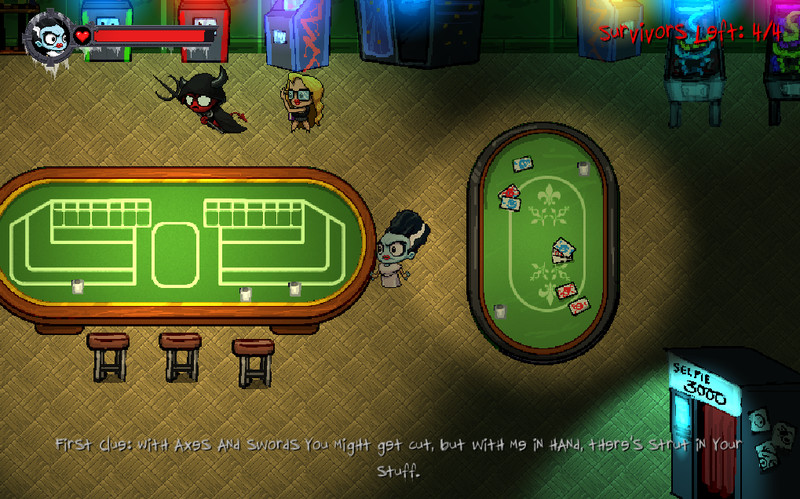 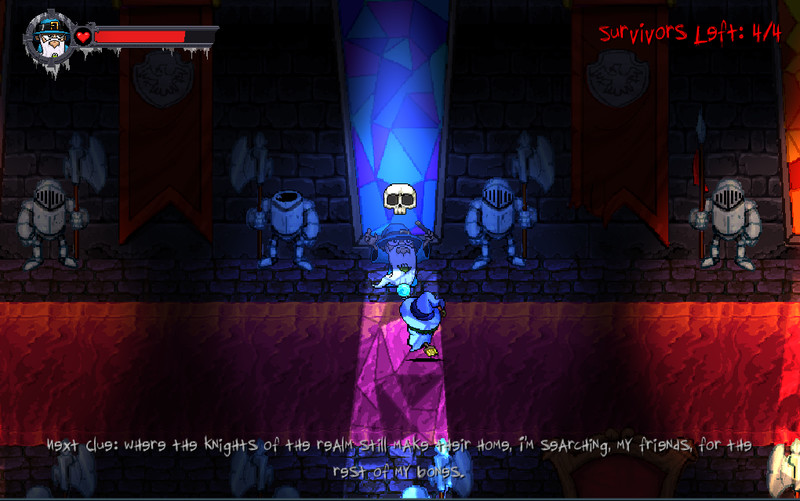 
This game is awesome, so everyone should play. Mainly because when I want to play at 3:30am, there should be enough people online to fill the minimum of 6 players. Why would anyone be asleep at 3 o'clock in the morning?. I was recommended this game last year around Halloween by a friend. I checked the game out and seemed like a quirky game I would enjoy. I bought the game and was playing it during its "prime" which only consisted of 2-3 full games around peak hours. If you were lucky you would find 1 full game around night time. The player base was very small to begin with. The Devil's Bluff team chalked it up to struggling advertising and couple that with being (and remains) overpriced for what the game was.

The Beginning<\/u><\/b>
The game initially was how the Devil's Bluff team intended the game to be. It was a mystery who the Devil was and you would only hear whispers or rumors while passing other players finding their clues. "The devil is male\/female, the devil is _____, etc". The devil player would genuinely try to keep their dark secret, usually attacking players who are split from their teammate then returning to human form. Nothing was more scary than your teammate turning into the devil before your eyes after collecting a few clues together. But after so many games the Devil players saw no reason to ever return to human form. It became the "norm" for the devil to immediately transform as soon as the game started and begin slaughtering everyone for an easy win.

The Devil<\/u><\/b>
Most people would agree that a 1v11 game is widely unfair, so the 1 man out (devil) would need to have some slight advantages. The Devil player was more than well equipped to dispatch players with ease. The devil player was faster and stronger than the other 11 players combined. Even if all the players banded together to stop the devil at the start the devil would still win. Human players had no real defense against the devil besides slapping\/knocking him to the ground (no damage) and running (he will catch you quickly) or "juking" him which involved enter and leaving rooms or stairs. 2-3 attacks from the devil would knock you out of the game unless another player revives you before your death timer hits 0. Most devil players would just camp around a few downed players yelling for help and then slaughter their would be saviors. The devil had a unending devil form and a secret room which allowed him to view and teleport to rooms of his choosing. The devil won a vast majority of the games unless a team was quick enough with their clues.

The Clues<\/u><\/b>
Clues were not very randomized in location or order of sequence. When you first started playing the game you really had to think about the clue and what room or item it is referring to. After a few games you quickly noticed clues seemed almost like an ordered set; clue 2 will be in the kitchen, clue 6 will be in the sewers, etc. Players quickly only had to read the first few words in a clue and knew what room and where the clue exactly was. Devil players hardly had any incentive to collect clues or help their teammate because while the devil camps downed players they drop clues(if you don't have that item) upon their death. Although other players could pick them up but it was unlucky they were not guarded by the devil. So a Devil who never collected 1 clue could still win by clues by killing players who collected their clues.

The Death of Devil's Bluff<\/u><\/b>
The community was vocal about addressing the clues and devil and had many discussions about different changes that could be implemented or changed. We wanted the game to be better for everyone because it was unique game. Players wanted more clues and they also wanted clues to have a more randomized order. They also wanted the devil to have a timer or cooldown to be in devil form so his reign of unending power wouldn't seem so unfair. The Devil's Bluff team RELECTUNLY implemented some of these changes; mostly involving the devil. I'm not sure which team member it was but I remember the patch release post where he basically called the community a bunch of cry babies so they changed the devil. I was disgusted how this team member mocked and treated players who wanted to improve a game they enjoyed. I was completely done with the Devil Bluff Team or the game at that point. However, I wanted to see the changes; I logged in afterward and the devil had a decreasing strength timer the longer he remains in devil form the weaker he becomes. Sadly, after this change it did not seem to bring anyone back to game and it became barren. But the devs and devils bluff team made their quick easy cash around Halloween last year and had no real commitment to sticking with their product.

TL;DR<\/u><\/b>
The game had a quirky unique atmosphere and was widely entertaining when it was first released. After a few games players noticed the clues are unchanging and predictable and the devil quickly proving his easy dominance over the other players. The devs reluctantly made changes after mocking their player base then quickly running off with their money bags and never looked back. The game was very short lived and I cannot recommend this game to anyone because NO ONE PLAYS IT. Save yourself money this or next Halloween and do not buy this game<\/u>.. This game is awesome, so everyone should play. Mainly because when I want to play at 3:30am, there should be enough people online to fill the minimum of 6 players. Why would anyone be asleep at 3 o'clock in the morning?. I've played nearly 8 hours of this game. The concept is great, but the gameplay doesn't actually match what the trailer or description convey. If you're looking for a deception game like Town of Salem, Werewolf, or BSG where you want to find the secret traitor, you will be disappointed. If you're looking for a scavenger hunt racing game where sometimes you stray and try to tackle someone instead, you will enjoy this.

It is not an 11v1 game: it is a 2v2v2v2v2v2 game where one of the teams is lucky enough to have a faster character that can kill you. The devil is not the "1," because he can still win with his partner. Also, the trailer says things like "betray" and "deceive," but the current win condition encourages the devil to cooperate with his team member. There is no incentive to betray at all. And no, I don't mean "there is an incentive to betray but it's more strategic to cooperate"; I mean there is literally 0 incentive to betray. Because of this, it's not really part of the gameplay.

It's still fun, but the gameplay experience is very different than what the trailer and concept description would have you believe. It's not like Werewolf or Mafia or any deception game, really. I'd liken it more to The Ship (which is cheaper, has a larger player base, and bots to play against even if you can't find a lobby).

I do think it's worth the $5 I paid for it, but it's not worth $15, especially if you can't play during the scheduled times in the discussion or if you don't have enough friends to guarantee a game. Also, there were so many bugs found within the first month of release that it really felt like I was paying to be a part of a beta instead of paying for a full game. A lot of them have been fixed now, but it's still disappointing that there hasn't been a dev update since December of last year.. Very fun! Had great conversation with my partner... who turned out to be the devil and murdered me halfway in the game. Would get backstabbed again! 10\/10. The game has a single map on which some traps are randomly placed. While it IS somewhat fun to play this for a while, sadly, the playerbase is really, really small. For a game to start, six players must gather, first. I've not had that happen for the past two weeks, meaning: I spent money on a game I can't play.