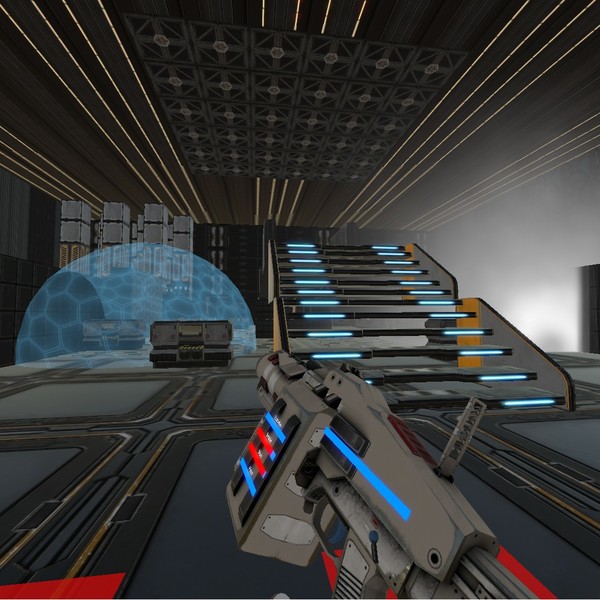 Battle Dome is a 5 v 5 competitive SciFi VR shooter (There is a mouse and keyboard mode, but VR is recommended). You must work with your teammates to get to your opponent's base and destroy their core before they destroy yours. You must also spread your team's color (if playing a color map), since you can only teleport onto your teams colored tiles. Battle Dome also features trackpad locomotion, which can be used to any non-color map.

Battle Dome has 5 different PvP game modes:
Destroy the Core
Team Deathmatch
Capture the Flag
King of the Kill
You Only Live Once (1 life per round)

There are also 3 different co-op modes (including a horror mode).

Currently, there are 5 gun choices and 3 color gun choices., as well as a shield Battle Dome also features built in voice chat (team and all talk).

Available for Arcades on SpringboardVR a09c17d780 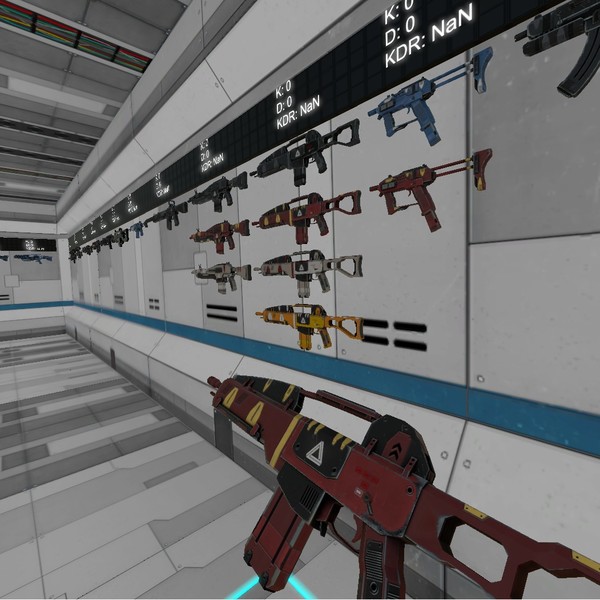 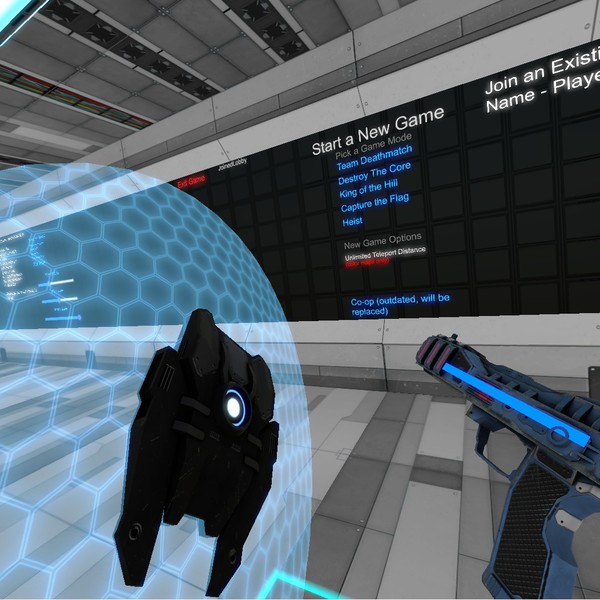 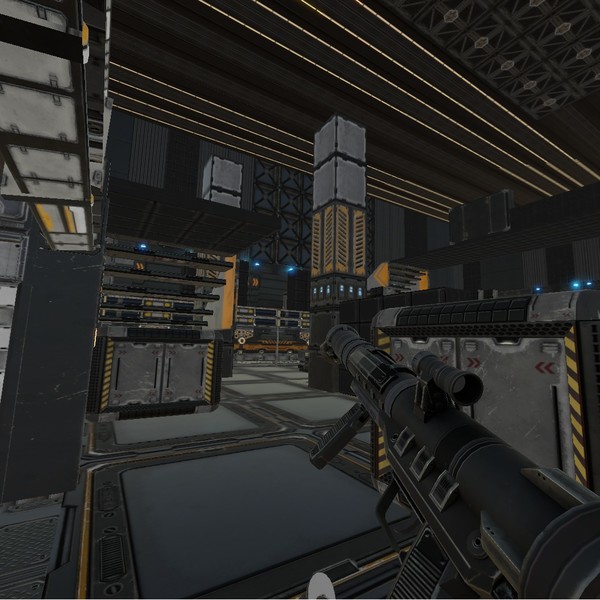 
And just like that, a genre is born.. About 45 minutes into getting this I'm getting frustrated because my team keeps losing. Boxed into the back of our base, I hear my team mates talking to people in their room, slowly figuring out the game, just as I did. I was the only one paiting, just barely holding the fort, hoping they figure it out (I don't have a mic). Then it clicks.

I'm in the back of the base trying to clear up the enemy teams paint when I hear, "We got your back bro lets do this." Just minutes earlier I heard the same dudes say "oohh that's how you move." I decide to trust him and I went for it, I moved up behind a barrier, knowing that I'd be in danger. I duck behind the barrier and paint while blind firing my pistol over my head. I'm feeling the pressure, but next thing I know it there is a team mate with a shield infront of me. He moved just in time because a hail of bullets and lasers start hitting his shield. I lean to my right and happen to have a perfect shot on the enemy and land a head shot.

I pop back behind the barrier and look behind me, there's my team mate on the other side of the barrier, he had my \u2665\u2665\u2665\u2665in' back! Everyone in the room is dead but us. The once clueless guy says over the mic, "Move up!." I moved up and began painting our path to victory, slowly and methodicly. We boxed the enemy team into their base, just as we were 30 minutes prior, except we were able to seal the deal for the win.

That was one of the best moments of team play I've experienced. I played baseball for 18 years of my life, as well as about 5 years of organized highly competitive gaming in team focused games (Team Fortress Classic and CS), that 1 hour was the most team play I've had playing any kind of game.

I wish I could've got those guys names, but after it happened I just had to set the Vive down and tell someone about how much fun I just had.. TL;DR Guys, don't be stupid. Drop what you are doing, buy, download, and play this game right now.

So I just finished playing this game for about an hour. The only reason why I had to stop was because I ran into my wall trying to get away from another player. I have been playing the Vive since mid-April. I have played over 30 VR games. NEVER have I felt so much immersion that I completely forgot my surrondings to that degree.

On that note, make sure to not have your chaperone set to "developer."

The teleportation in this game is timed so that you cannot simply spam it around the courses. In fact, when and where to teleport is part of the strategy. The brilliant part of this game is that every time you teleport you make a "pew" sound. This is like the foot falls of COD or Overwatch.

The shooting mechanics are superb and well-balanced. The sniper rifle is challenging but it works well if you have a steady hand (which I don't and you can't just push the shift key).

The voice chat is well done. The environments are amazing in terms of transporting you to another reality.

This is one of the best VR games out there. In my opinion, it is better than Hover Junkers...and that is saying a lot.. game is dead. game is dead. Really fun battle simulator, I just wish more people were on. Basically Splatoon meets Halo. By far one of the most fun VR games released so far. Don't let the simple graphics deter you (this is early access after all - give it some time and I'm sure it'll become very polished).